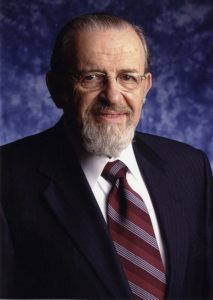 Rabbi Dr. Lamm was born in Brooklyn in 1927, just as the Rabbi Isaac Elchanan Theological Seminary was moving uptown from the immigrant neighborhood of the Lower East Side, its home since 1886, to a magnificent new Moorish Revival building, in then bucolic Washington Heights, designed to house both the rabbinical seminary and the nascent Yeshiva College. Rabbi Dr. Lamm, a son of Eastern European immigrants, grew up in Williamsburg, Brooklyn, and attended the local Yeshiva Torah Vodaath until he entered Yeshiva College in 1945. Lamm’s life and career and are intertwined with the history of Yeshiva and the development of an immigrant Jewish community into today’s vibrant modern Orthodox world. Lamm was a formative and inspiring figure and a major influence in that growth.

Rabbi Dr. Lamm graduated from Yeshiva College – by then part of Yeshiva University – in 1949 as class valedictorian; he received semikhah from the Rabbi Isaac Elchanan Theological Seminary in 1951 and a Ph.D. in Jewish philosophy from the Bernard Revel Graduate School of Jewish Studies in 1966.

Rabbi Dr. Lamm served for one year as assistant to Rabbi Joseph Lookstein and thereafter as rabbi of Congregation Kodimoh in Springfield, Massachusetts, and from 1958 to 1976 as the spiritual leader of the Jewish Center in Manhattan. Rabbi Dr. Lamm also joined the Yeshiva University faculty in 1960 and was appointed as the Erna and Jakob Michael Professor of Jewish Philosophy in 1966. He became the third president of Yeshiva University in August 1976 – the first president of Yeshiva born in the United States – and served in that capacity until 2003.

During Rabbi Dr. Lamm’s tenure as president of Yeshiva University he brought the university to financial solvency, strengthened its vision of Torah U’Mada, increased Torah and Talmud opportunities at Stern College for Women, and enhanced the university’s connections with Israel. In addition to all his responsibilities as President and Rosh Yeshiva, he continued to publish throughout his career

Here are some photographs from Rabbi Dr. Lamm’s tenure at Yeshiva University: 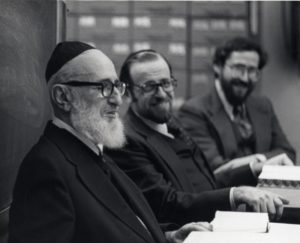 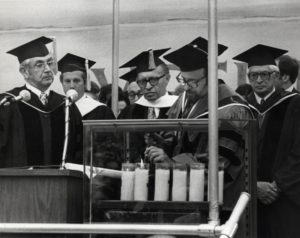 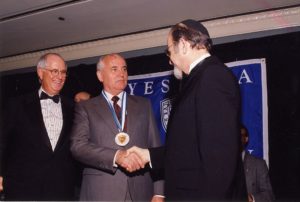 Yeshiva University holds a collection, donated by Rabbi Dr. Norman Lamm, of almost all of the sermons he delivered during his years in the rabbinate, spanning more than half a century, from 1951 to 2004. They are full sermons, as he delivered them, unedited for publication, in typescript or handwritten format. The collection, entitled Derashot Shedarashti: Sermons of Rabbi Norman Lamm, is available here.

In addition, Rabbi Dr. Norman Lamm donated tapes of lectures recorded at adult education lectures, alumni gatherings, dorm talks, Chag HaSemikhah ceremonies, memorial occasions, and more, from 1960 through 2003; you are welcome to listen to them here.

May his memory be for a blessing.