YAIR Update: Summer 2020 Set in Stone, a Rosh HaShanah Lithograph from Jerusalem in the 1920s 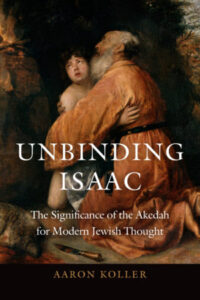 Join us on Monday, September 14 at noon for a lively discussion via Zoom on Aaron Koller’s new book, Unbinding Isaac: The Significance of the Akedah for Modern Jewish Thought.  Professor Koller teaches Near Eastern studies in the Robert M.  Beren Department of Jewish Studies.  Reserve a space to receive the Zoom link.

Unbinding Isaac takes readers on a trek of discovery to insight into the binding of Isaac story for our times. The early nineteenth-century Danish philosopher Søren Kierkegaard viewed the biblical story as teaching of suspension of ethics for the sake of faith, and in the twentieth century Jewish thinkers developed this idea as a cornerstone of their religious worldview. Koller examines and critiques Kierkegaard’s perspective—and later incarnations of it—on textual, religious, and ethical grounds. He also explores the current of criticism of Abraham in Jewish thought, from ancient poems and midrashim to contemporary Israel narratives, as well as some of the many ways Jews have responded to the Akedah over the generations.

Finally, bringing together all these multiple strands of thought— along with modern knowledge of human sacrifice in the Phoenician world—Koller offers an original reading of the Akedah grounded in medieval Jewish philosophy and attuned to the modern world: The biblical God would like to want child sacrifice – because it is in fact a remarkable display of devotion – but more so does not want child sacrifice, because it would violate the child’s autonomy. Thus, the high point in the drama is not the binding of Isaac, but the moment when Abraham is told to release him. As Koller explains, the Torah does not allow child sacrifice, which, by contrast, some of Israel’s neighbors viewed as a religiously inspiring act, for a specific reason: the story teaches us that an authentically religious act cannot be done through the harm of another human being.