Set in Stone, a Rosh HaShanah Lithograph from Jerusalem in the 1920s Library Book Talks, fall 2020 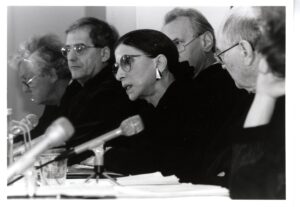 “Oyez, oyez, oyez! The International Constitutional Court of Harmonia is now in session,” Chief Justice Ruth Bader Ginsburg presiding. If you haven’t heard of Harmonia, you’re not alone: Harmonia was a construct, an imaginary country created for a hypothetical case discussed at the conference “Justices at Work,” an international constitutional panel held at the Cardozo School of Law on September 19, 1995.

The case before the court was Bovary against the Administrator of the International Brotherhood and Sisterhood Youth Organization. Harmonia, an island nation, was a centralized secular parliamentary democracy, created at the end of a civil war, under the aegis of a UN mission to oversee a transition to peace. Seven countries: France, Germany, Hungary, Israel, Italy, the United Kingdom, and the United States, formed the UN mission and established a constitution for Harmonia, which was voted on and accepted by 63% of Harmonia’s eligible voters. The constitution established an independent judiciary, including a Supreme Constitutional Court. The background of the lawsuit was the passage of the “National Brotherhood and Sisterhood Youth Organization Act” … “which was designed to maintain national unity based on respect and tolerance.” Most of Harmonia’s citizens were pleased with the act, although the Baal religious leaders objected to it, particularly the section requiring all children ages six to eighteen to attend a “co-educational four week summer camp where boys and girls are obligated to sleep in the same unisex residential halls, albeit that these halls are at all times under adult supervision” and that schools as well as the camp teach that “diverse life styles are equally acceptable and that all people are equally deserving of respect regardless of their sexual orientation.” Baal leaders objected to the sexual egalitarianism and the relativistic approach to ethnic and religious differences. Baal leaders had petitioned the Supreme Court to open their own camps, but the petition was rejected.

The hypothetical case involved parents who deemed that their parental and constitutional rights were infringed on by these provisions for education and camp, particularly mandatory participation in the camp and incidents and disciplinary measures which took place there. The justices animated discussion of the case touched on “fundamental human rights like public education, religious freedom, equal opportunity, parental rights, and freedom of speech as well as more specific issues like the constitutionality of co-education versus single-sex institutions.”

In addition to Justice Ginsburg, the judges hailed from the other countries of the UN mission in charge of Harmonia. No final conclusion was reached in the case; the purpose of the day was primarily educational; it provided attendees with a chance to learn about the legal systems of seven different countries. Each justice explained how a constitutional issue would reach a court in their country. Representatives from Britain and Israel, the two nations on the panel without a Constitution, explained their countries’ processes. Lord Slynn, of the House of Lords, explained that since Britain has no constitution, “there is no yardstick against which … legislation can be judged,” though British judges are increasingly recognizing fundamental rights.” Justice Yitzhak Zamir of Israel’s Supreme Court stated that Israel is “gradually changing to a written one [constitution] like the United States.” He explained that a law will be deemed constitutional if it meets three requirements: “it must embody Israel’s values, have a positive purpose, and cannot disproportionately infringe upon fundamental rights.” Justice Ginsburg explained that in the United States, “the Supreme Court’s business is the business of an ordinary court … Most cases we hear are not Constitutional law.”

It must have been an extraordinary day for the three hundred attendees who filled the courtroom which had been constructed in Brookdale Center for the occasion. Cardozo Life commented that Justice Ginsburg’s “concise questions and strict adherence to time limits made the day a brilliant one for all attendees.”

May Justice Ruth Bader Ginsburg’s example continue to inspire the Supreme Court of the United States.