Library Book Talk | Rabbi Allen Schwartz on Conflict & Resolution in the Early Prophets From Stern to Scholastic: A Journey in Children’s Publishing 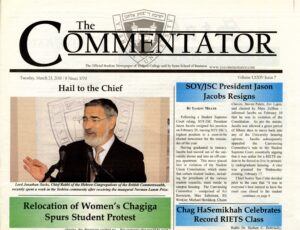 Rabbi Lord Jonathan Sacks, former Chief Rabbi of the United Hebrew Congregations of the British Commonwealth, died on November 7, 2020. Rabbi Sacks, a noted scholar, writer, and lecturer, had a long-term connection to Yeshiva University and to Rabbi Dr. Norman Lamm, the University’s recently deceased former president. Rabbi Sacks was the first, and thus far the only, recipient of the Norman Lamm Prize in 2010, which was established in honor of Chancellor Lamm’s 80th birthday. Rabbi Sacks spent a week on campus as a guest, lecturing and speaking to students. The Commentator dubbed their photo of the event “Hail to the Chief;” the Observer reported that his wife, Lady Elaine Sacks, accompanied him and both “graced Stern College” for a Shabbaton. 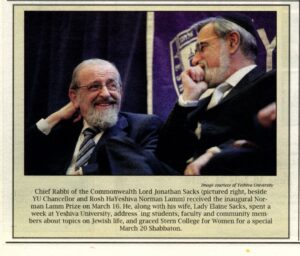 Rabbi Lord Jonathan Sacks received eighteen honorary doctorates, including one from Yeshiva University in 1997; this is an excerpt from his address at the commencement:

“We find ourselves today in a world with two kinds of Jews – one group formidably well-educated and yet Jewishly almost illiterate; and another group of Jews who are fluent in Maharsha and the Ketzot HaChoshen and yet who stammer when it comes to the cultures of the world.

Ha-yitakhen?! היתכן?! Is that how it was supposed to be? There are cerebral lesions in which the connection can be fractured between the right and left hemispheres of the brain. The result is a disintegration of the personality. I believe today the Jewish people is suffering from a lesion which has broken the connection between the left and right hemispheres of the Jewish people. And there is only one group of people who can help to heal that fracture, and that is you – the graduates of Yeshiva University — because you, almost alone in today’s Jewish world, have learned to combine Torah and chochma, to integrate yeshiva and university. You know that they are not שתי רשויות, [shete reshuyot] ‘two separate domains’’; they are the two hemispheres of the Jewish soul. Chochma reminds us that we are humans, we are citizens of the universal enterprise of mankind, and Torah reminds us that we are Jews, heirs of the greatest heritage ever conferred upon a people.”

Rabbi Sacks’ message to the graduates of Yeshiva University in 1997 still resonates today.