From Stern to Scholastic: A Journey in Children’s Publishing Post-Holocaust Hanukah in Schirmeck, 1946 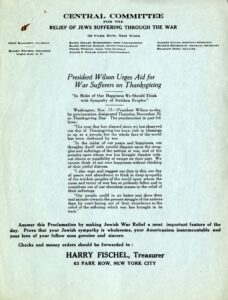 The Central Relief Committee (CRC) issued a Thanksgiving appeal for Jewish War Sufferers in 1916, one example of the CRC’s fundraising efforts in its many years of work on behalf of Jews trapped between the warring sides during World War I. The CRC was founded by the Union of Orthodox Congregations of America on October 14, 1914, three months after the outbreak of the First World War, to provide aid to “Jews in Eastern Europe and the Holy Land” caught in the throes of the war. The organization’s motto was “Shed Tears for the Dead, But Give Bread for the Living.” Yeshiva University Archives houses the records of the CRC.

President Woodrow Wilson’s annual Thanksgiving proclamation in 1916, the last peacetime Thanksgiving the United States enjoyed before entering World War I, stated: “In the midst of our peace and happiness, our thoughts dwell with painful disquiet upon the struggles and sufferings of the nations at war, and of the people upon whom war has brought disaster without choice or possibility of escape on their part. We cannot think of our own happiness without thinking of their pitiful distress.” The President urged Americans “to contribute out of our abundant means to the relief of their sufferings.”

The CRC expanded on the president’s message to encourage donations: “Answer this Proclamation by making Jewish War Relief a most important feature of the day. Prove that your Jewish sympathy is wholesome, your Americanism insurmountable and your love of your fellow man genuine and sincere.”

Thanksgiving 1916 was not the first time the Central Relief Committee had to be grateful for President Wilson’s efforts on behalf of war relief; earlier that year, the President had proclaimed January 17, 1916, National Jewish Relief Day, “a day upon which the people of the US may make such contributions as they feel disposed for the aid of the stricken Jewish people.” A CRC press release commented: “The action of President Wilson, endorsed as we now know that it is by practically the entire people of the United States will sweep on one side any protests by some of the weak-kneed among us, who fear, often for selfish reasons, to voice the demands and the hopes of the Jewish people.” Over two million dollars was raised on National Jewish Relief Day and on February 17, 1916, the Central Relief Committee sent a delegation to the White House to present President Wilson with an illuminated address commemorating the historic Day. The war needs were so great, that despite the success of National Jewish Relief Day, CRC fundraising needed to continue throughout the war years.

The United States entered the First World War on April 6, 1917, on the side of the Allies. American Jewish soldiers now joined the US Armed forces and fought in the conflict. Thanks in part to American participation in the war, the Allies won. An armistice was declared, and the First World War ended on November 11, 1918, in time for President Wilson to express the nation’s gratitude for peace in his Thanksgiving Proclamation of 1918.  A sample Jewish congregational Thanksgiving service for 1918 is housed in the Yeshiva University Archives, in the papers of Rabbi Henry Morais. It includes a “Thanksgiving Prayer for the Armistice = Tefilah le-Todah” and a “Memorial Prayer Thanksgiving Prayer for the Armistice = Tefilah le-Todah” and a “Memorial Prayer = Hazkarat Neshamot” (in English and Hebrew) for members of the armed forces who lost their lives. The “Memorial Prayer” also remembers “all those who have laid down their lives as victims of the hunger, the suffering and the oppression brought upon them by war.” Facsimiles of these prayers are on view on the fourth floor of the Gottesman Library in the exhibit cases.