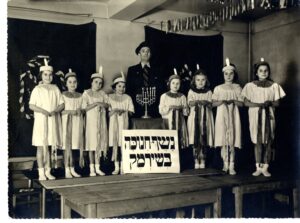 The holiday of Hanukah, the Festival of Lights, celebrates the re-dedication of the Temple in Jerusalem by the Maccabees after its desecration by King Antiochus Epiphanes and the miracle of a day’s worth of oil burning for eight days. Hanukah in 1946 was only the second time the holiday was celebrated after the devastation and near annihilation of the Jews of Europe by the Nazis during World War II, a time when the Jewish people was in need of renewal, hope, rebirth, and light after years of war, death, and darkness.

This photograph of a Hanukah party in a Rescue Children, Inc. home in Schirmeck, France was taken in December 1946. Each child in the photo is a miracle, a ray of light, a point of hope, both for themselves as individuals and as members of the Jewish people. These children had lived through the War. Some had survived concentration camps; others were hidden in in orphanages or convents or by individual heroic Christians. Many children had lost their parents, brothers, and sisters. After the War, the Vaad Hatzala organization located over two thousand Jewish orphans, but could not afford to take care of them. Vaad Hatzala decided to the best course of action was to create a separate organization on behalf of the children, and approached Herbert Tenzer, who founded Rescue Children, Inc. Tenzer was on the Executive Board of Vaad Hatzala at the time and later served in the House of Representatives (1965-1968) and as chair of the Board of Trustees of Yeshiva University (1977-1989).

The organizational records of Vaad Hatzala and Rescue Children, Inc. are housed in the Yeshiva University Archives.