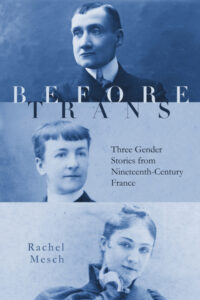 On Monday, April 19 at 7:30 p.m. via Zoom, Rachel Mesch, Professor of English and French and Chair of the English Department, Yeshiva College will discuss her book, Before Trans: Three Gender Stories from Nineteenth-Century France, with Liesl Schwabe, Lecturer in English and Writing Program Director.  The book, published by Stanford University Press, was a finalist in the 2020 American Library in Paris Book Award, sponsored by the American Library in Paris. The book is A fascinating exploration of three individuals in fin-de-siècle France who pushed the boundaries of gender identity.

Register to receive a Zoom link for this event.

Before the term “transgender” existed, there were those who experienced their gender in complex ways. Before Trans examines the lives and writings of Jane Dieulafoy (1850–1916), Rachilde (1860–1953), and Marc de Montifaud (1845–1912), three French writers whose gender expression did not conform to nineteenth-century notions of femininity.

Dieulafoy fought alongside her husband in the Franco-Prussian War and traveled with him to the Middle East; later she wrote novels about girls becoming boys and enjoyed being photographed in her signature men’s suits. Rachilde became famous in the 1880s for her controversial gender-bending novel Monsieur Vénus, published around the same time that she started using a calling card that read “Rachilde, Man of Letters.” Montifaud began her career as an art critic before turning to erotic writings, for which she was repeatedly charged with “offense to public decency”; she wore tailored men’s suits and a short haircut for much of her life and went by masculine pronouns among certain friends.

Dieulafoy, Rachilde, and Montifaud established themselves as fixtures in the literary world of fin-de-siècle Paris at the same time as French writers, scientists, and doctors were becoming increasingly fascinated with sexuality and sexual difference. Even so, the concept of gender identity as separate from sexual identity did not yet exist. Before Trans explores these three figures’ lifelong efforts to articulate a sense of selfhood that did not precisely align with the conventional gender roles of their day. Their intricate, personal stories provide vital historical context for our own efforts to understand the nature of gender identity and the ways in which it might be expressed.