Shavuot at Mount Sinai of Korea, 1954

Have you seen the episode of MASH where Hawkeye performs a bris, supervised remotely by a rabbi via radio and Morse Code?  The fictional rabbi may have been based on someone like Rabbi Jerome Lipsitz, a musmach (graduate) of the Rabbi Isaac Elchanan Theological Seminary (RIETS) in 1952, who served as a chaplain in the US Army I Corps in Korea in 1954.

Lipsitz sent this photograph to Sam Hartstein, Yeshiva University’s Director of Public Relations. Lipsitz explained that the photo had appeared in the army publication, Stars & Stripes. The caption reads: “Commandments Commemorated – Jewish members of I Corps gathered Sunday at this Korean mountain to hold Shavuot services commemorating Moses descent from Mount Sinai with the Ten Commandments. At the base of the mountain, which has been named the Mount Sinai of Korea, is the choir which sang for the services.” 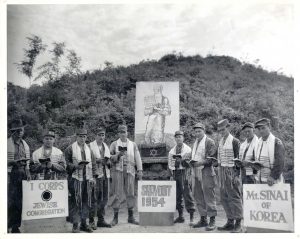 Chaplain Lipsitz is 5th from the right in the photograph – he is a lieutenant and wears a different cap. Also noteworthy is the presence on the left of an Australian soldier, identifiable by his hat, who was serving with the British Army. The other soldiers hailed from the Bronx, Brooklyn, Chicago, Detroit, and Pittsburg, CA.

The Jewish chaplains in the US military worked with the Jewish Welfare Board, established in 1917 during World War I to aid Jewish soldiers serving with US forces. Their work continues today as the JWB – Jewish Chaplains Council.  The Jewish chaplaincy insignia is a pin with Ten Commandments, which Chaplain Lipsitz sports on his right lapel in this photograph, and which, of course, is a symbol of the holiday of Shavuot. 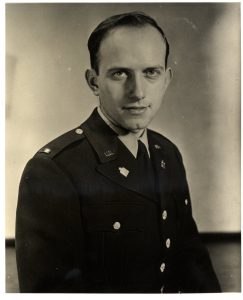 Chaplain Lipsitz wrote to Samuel Sar, Dean of Men at Yeshiva University, on March 19, 1954, and described the life of a chaplain: “I have just returned from Seoul where I was fortunate in obtaining a gallon of wine for tonite’s Kiddush, and according to my watch, I still have an hour before ‘licht benshen’. This should give me ample time to relate a few pertinent remarks. … I have been in Korea a few short weeks and I have been assigned to the 7th Infantry Division. … The hill facing my tent is neutral territory, which means that I am as far north as we are permitted to go, without violating the truce. [an armistice was signed on July 27, 1953; I Corps remained in Korea for almost another twenty years guarding the Demilitarized Zone.] There are over three hundred and forty Jewish personnel in our division and the majority attend services regularly. … The work is most rewarding and I feel that all chaplains in Korea join me in saying, that as long as we have to be away from home, there is no country on earth that needs chaplains as does Korea. The men live in an atmosphere remote from any conveniences of a civilized country and continually seek solace and comfort from their chaplain.”

Chaplain Lipsitz returned to the United States and worked as a congregational rabbi; his last position was, in a sense, a return to Yeshiva University – he was the Director of the Office of the Canadian Friends of YU from 1985 until his death in 1994.