The old adage, don’t judge a book by its cover, fails to consider that the cover itself may tell a story. 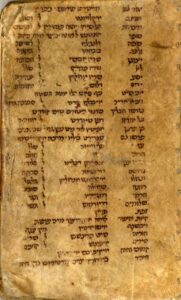 Three manuscript fragments were sewn together to create this cover of Sefer Yuhasin by Abraham Zacuto (1452 – ca 1515), a first printed edition (Constantinople, 1566), held in Yeshiva University’s rare book room.  The Hebrew fragments are sewn together, facing in opposite directions. This intriguing arrangement yields a fascinating conclusion. The sections were scanned, turned right side up, revealing a clue to the puzzle: one piece was complete, in relatively good condition, and fairly legible.  This fragment has three distinct columns. The column on the right-hand side is a list of words in Hebrew:  the difficult words in the text of Isaiah 33:14 – 34:13, arranged in order of the biblical verses; the middle column is an explanation of each word in medieval Judeo-French; and the left-hand column is an explanation of each term in Hebrew.  And at the bottom of another manuscript piece, straddling the spine and covers, is a remnant of Nahamu, the haftarah of comfort and consolation. Nahamu (Isaiah 40:1-26) is recited on the Shabbat following the solemn Tishah B’Av fast, in memory of the destruction of the Beit Ha-Mikdash, the Temple in Jerusalem.

Judeo-French is not your high school French. Its origins are over a thousand years old – dating from the late tenth century – through the era of the Biblical commentary of  Rashi (Solomon ben Isaac; 1040–1105) and his explanations in לע”ז, Judeo-French –  to the early fourteenth century when Jewish life in medieval France essentially ended. Judeo-French texts evolved from Biblical glosses and glossaries – the manuscript under discussion is an example – to poetic and technical literature. There is scholarly debate over the character of Judeo-French: was it identical to “langue d’oïl,” Old French, the language of Northern France at the time, distinguished only by its Jewish content in Hebrew characters?  Or was it a distinct language? Since there are only a few Judeo-French texts from this time period, perhaps YU’s manuscript can help shed light on this question.

Were these manuscript fragments related to any known Hebrew and Judeo-French manuscripts?  A search in the National Library of Israel’s Ktiv database revealed a likely match, possibly another section of the same manuscript:  a thirteenth century manuscript, a “Judeo-French Bible glossary with Hebrew remarks,” Jewish Theological Seminary manuscript 837. The JTS manuscript is from the Elkan Nathan Adler collection; Adler, son the Chief Rabbi of the British Empire, Nathan Marcus Adler, was a famed Judaica collector.  Adler purchased the manuscript, which formed the binding of a Hebrew incunable, in the Tunis Mellah in 1905.

Yeshiva University Library’s copy of Sefer Yuhasin, with its unique manuscript cover, is part of the Berthold Baruch Strauss Collection. Strauss was a noted Judaica collector in London;  Ludwig Jesselson, ob”m, was instrumental in acquiring the Strauss Collection for the Library in 1966.  Mr. Jesselson served on the YU Board of Trustees from 1961 until his death in 1993; he was chairman of the Board from 1989 – 1993.

The date the 1566 edition of the library’s copy of Sefer Yuhasin was bedecked with the manuscript cover is unknown. The manuscript binding may have once have covered another work since the manuscript spine of the library’s copy of Sefer Yuhasin bears another title, Shalshelet Hakabalah, a historiographic work by Gedaliah ibn Yahya (1526-1587), first published in Venice in 1587. Perhaps someone who owned both historiographic works switched covers at some point.   Maybe one day a conservator can disbind the cover and unveil the text hidden behind the curtain of the cover. What was once a treasured text and then binder’s scraps will be transformed into a wealth of information again. 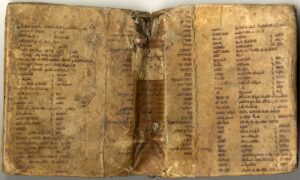 The cover of Sefer Yuhasin joins manuscript scraps together to form a physical, utilitarian, whole when the text on the pieces was no longer deemed useful. The Ktiv catalog, based in Jerusalem at the National Library of Israel, helped unite YU’s manuscript fragment with a companion manuscript at JTS, only sixty blocks away in New York. And if someone is interested in the history and text of Sefer Yuhasin itself, YU’s catalog enables a researcher to locate, and view online, a manuscript of Sefer Yuhasin, a sixteenth century handwritten text, held at YU, (Ms. 1369) on loan from Richard and Debra Parkoff.

Today technology can help unite disparate manuscript fragments from all over the world. Content which was neglected, perhaps even scorned, comes to life.  Uncovering the cover stories buried in plain sight on many books, can shed light on how the Jewish community studied, lived, wandered, and continued on its way despite many odds.

Let us hope that the message of Nahamu, comfort and consolation, of divine and human reconciliation, can be furthered by modern technology which aids and eases the paths of Jewish scholarship and study.  As the prophet Isaiah states in Nahamu: והיה העקב למישור והרכסים לבקעה  —    And the path will be smooth and even, the valleys will be level and the hills will be flattened.

Credits:  Thank you to my colleagues Tina Weiss, Zvi Erenyi, and Sara Saiger  for valuable suggestions and help; David Selis, a doctoral student at the Bernard Revel Graduate School who placed a query about the manuscript fragment on social media, to Dr. Martina Mampieri who identified the language as “langue d’oïl,” to Dr. Judith Olszowy-Schlanger and Dr. Emma Abate for dating the manuscript, and to Rabbi Dr. Robert Harris for reminding me of the obvious.