Introduction to RefWorks for Graduate Students and Faculty Yeshiva University and the 9/11 Attacks: Documents from the YU Archives

Zichronot: Memories of Rosh Hashanah in the American Press, 1823-1869

Professor Ronald Rubin donated an illuminating and extensive collective of American newspapers to the Mendel Gottesman Library. The papers date from 1734 to 1869, thus covering the Colonial era, the Revolution War, and the Civil War and its immediate aftermath. The collection is unique in its area of focus: each of the 350 newspapers includes information on the Jewish experience in America during this early time period in the development of the Jewish community in the United States. This blog post is based on Professor Rubin’s masterful book on his collection, Strangers & Natives: A Newspaper Narrative of Early Jewish America 1734-1869. The Library is most grateful to Professor Rubin for this treasured gift. 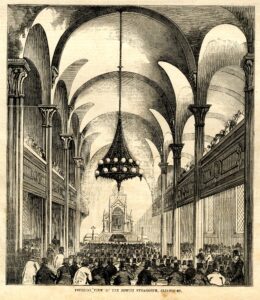 During this time period, newspapers rarely included illustrations in their pages, let alone pictures relating to the Jewish community. One exception was the Illustrated News which printed an image of a synagogue (Congregation Rodeph Sholom) on Clinton Street on the Lower East Side, on May 14, 1853. A curious observation in the accompanying article, “The New Synagogue” states: “The principal portion of their [the Hebrews] service is chanted – one of the essential qualifications of a leader being a thorough knowledge of music, which art is probably more cultivated among the Jews than among any other race in the world.”

This magnificent, historic, building still exists today and houses Congregation Chasam Sopher. A fascinating aspect of doing research in the newspapers is the context they provide – other news events of the day, and advertisements such as this one: did any of the women attending the synagogue at the time wear any of these fashions? 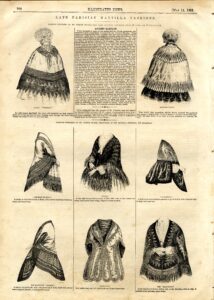 Although the Jewish community in the United States was small during the 1860s, at least two newspapers, both located in the South, described Rosh Hashanah, its meaning, prayers, and customs. indicating that the Jewish communities in those cities in the post-Civil War era were worthy of note.

The Alexandria Gazette (September 21, 1865) commented: “Jewish New Year.—Yesterday was the beginning of the Jewish New Year, or the anniversary of the creation, and as such celebrated by the Jews all over the world. … All the places of business of the Hebrews are closed. The celebration lasts until sunset tomorrow. The number of the Hebrew population in this place, and the extent of their business, were plainly perceptible today, by the numerous stores, shops and places of business closed on King street and in other places of the city.” At the time, the Jewish population in Alexandria, Virginia, numbered 300-400 people out of a total population of 12,600.

The Charleston Daily Courier (September 6, 1869) provided a detailed article on: “The Jewish New Year A.M. [Anno Mundi] 5630.” The six-paragraph long piece explained that Jewish holidays start at night, rather than in the morning. It quoted the Biblical verse ordaining the holiday, “And the Lord spake unto Moses, saying, In the seventh month, in the first day of the month, shall ye have a Sabbath, a memorial of blowing of trumpets, a holy convocation.” The subsequent paragraph explains how the seventh month is the beginning of a new year: “Tishri, although thus counted as the seventh month in religious observances, is nevertheless the first month of the year, and the anniversary of the creation of the world.” Then there is an explanation of the ram’s horn, blown in memory the binding of Isaac, and the ram sacrificed in his stead, followed by, “The day is also called a day of memorial, because at the close of one year and the commencement of the next all mankind should bring to mind their actions of the past, and after a solemn review of faults and frailties, enter, as it were, anew into a covenant with his Maker, the great King of Kings, Creator and Governor of the whole Universe.” The article goes on to explain that “the new year also commences the ten days of penitence, the last of which is called ‘Yom Kippur,’ or day of atonement, of which we will give our readers an account in due time.” The piece concludes with the comment, “The services are of the most solemn and impressive character, and even the lukewarm Israelite always unites with his brethren in the faithful observance of the “Day of Memorial.”

It is jarring to contrast this respectful and educational article with the one appearing directly above it in the same column, “Some Doings of a Negro Magistrate: An Incendiary Negro Insults and Falsely Imprisons a Northern Man – A Band of Armed Men Serve a Magistrate’s Warrant – Reactions of a New Regime.” Although today we cannot know the truth regarding the accusations in “Some doings of a Negro Magistrate,” the title alone attests to the postbellum attitude to Black people in the South during the era of Reconstruction.

Perhaps the most telling item about the Jewish situation in America during this time period is a legal notice in The National Advocate, a New York City newspaper, on March 25, 1824. In what may well be the first time Hebrew typeface appears in an American newspaper. 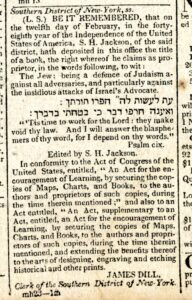 followed by a translation of two verses from Psalms CXIX: “’Tis time to work for the Lord: they make void they law. And I will answer the blasphemers of they word, for I depend on they words.” The notice and the biblical verses are in a copyright notice for the first Jewish periodical ever to be published in the United States: “The Jew: being a defence of Judaism against all adversaries, and particularly against the insidious attacks of Israel’s Advocate,” edited by S. H. [Solomon Henry] Jackson. The identical explanation for the publication of The Jew and the Hebrew verses appears in issues of The Jew, which was published in response to the missionary publication, Israel’s Advocate; or, the Restoration of the Jews Contemplated and Urged, a periodical issued by the American Society for Meliorating the Condition of the Jews. The Jew (1823-1825) was the first anti-missionary periodical published in the United States. Jackson believed that silence was an inappropriate and inadequate response to Christian 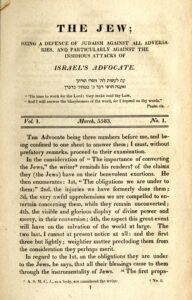 missionary activities. As a printer, who had both Hebrew and English typefaces, Jackson was in a position to publish The Jew. He further contributed to Jewish observance in American when he published a Siddur, The Form of Daily Prayers, According to the Custom of the Spanish and Portuguese Jews with an English translation (1826) and a Haggadah with an English translation in 1837. Jackson died in 1847.

It is perhaps no surprise that the notice for The Jew appeared in The National Advocate, owned by Naphtali Phillips (1773-1870), the first Jew in America to publish and edit a general interest newspaper. He also wrote a history of Congregation Shearith Israel. Later, Mordecai Manuel Noah worked for his uncle, Naphtali Phillips, as editor of The National Advocate for a number of years until he resigned in 1826; thus, the legal notice for The Jew was published under Noah’s tenure at the newspaper. It appears that in the 1820s, Jewish publishers played a significant role in both general life and in Jewish matters in the United States, particularly in New York, yet despite their prominence, Jews nonetheless needed to counter missionary activity. Thus, Jews were in the unenviable position of needing to defend themselves, yet in the enviable position, rare at that time in the world, of having sufficient resources and freedom of speech to do so.

It is worth noting that contemporaneously, a positive and friendly article on a new synagogue edifice appeared in the Niles’ Weekly Register (January 4, 1823), a national magazine published in Baltimore. The reporting describes the dedication ceremony of Mikve Israel in Philadelphia, a historic congregation known as the “Synagogue of the American Revolution.” The dedication took place on 11 Tishrei, the day after Yom Kippur, September 26, 1822, the 47th year of the independence of the United States of America. “This happy country in which religious and civil liberty is secured to its inhabitants, is now at peace with the whole world; may that enjoyment long endure, and the integrity of this government, and the reign of ‘virtue, liberty and independence’ be triumphant until ‘the wreck of matter and the crush of the worlds.’” The patriotic spirit and gratitude of the Jewish community for the freedom of religion in America are evident in this description, a spirit, which far more than the Christian missionary one, has characterized Jewish life in the United States.

May this generous spirit continue to prevail in the United States, this year and during the years to come.