Yeshiva University and the 9/11 Attacks: Documents from the YU Archives

As the nation commemorates the 20th anniversary of 9/11, Yeshiva University Archives provides two offerings from its holdings documenting initiatives by or relating to the University from that dark time.

First, we remember with great pride and gratitude the students of Stern College for Women who, for months after the attacks, covered the Shabbat rotation of the 24/7 shmira that Orthodox volunteers had set up to ‘watch over’ the victims’ remains in fulfillment of the Jewish legal requirement that a deceased body not be unattended prior to burial.  As the only Jewish institution within walking distance to the tent that served as a morgue across from the City Medical Examiner’s offices on First Avenue and 30th Street, these young women, who lived at Stern’s nearby dormitories, trekked by foot in shifts each Shabbat to recite tehillim (Psalms) and other prayers on behalf of the deceased, ensuring the shmira continued uninterrupted. 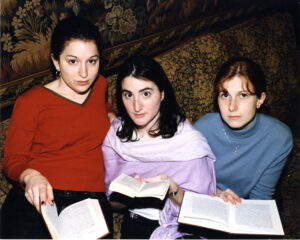 Their dedication and compassion impressed the guards and others at the site who would watch over the collection of prayer books and other items they prepared in advance of their shifts, since they also could not carry on Shabbat.  Their humble, noble efforts were widely written about, including in the New York Times article seen below.

One participant, Jessica Russak-Hoffman, has reflected on the experience from twenty years ago in this recent article.

Our students truly infused the darkness with some much-needed light.

Second, to coincide with the first anniversary of 9/11, Yeshiva University spearheaded and published the pamphlet “From the Depths I Have Called to You: 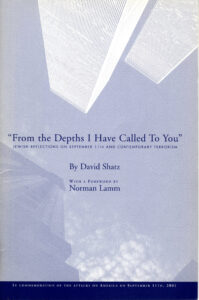 Jewish Reflections on September 11th and Contemporary Terrorism” authored by Professor David Shatz, Ronald P. Stanton University Professor of Philosophy, Ethics, and Religious Thought. Drawing widely from Jewish classical sources as well as modern thinkers, and introduced and contextualized by former Yeshiva University President Rabbi Dr. Norman Lamm, the work grapples with issues such as religious fanaticism and the nature of evil that the attacks brought to the fore.  Instructive as it was when first published, it remains relevant today.

We hope these items will make your commemoration of this sorrowful anniversary more meaningful.