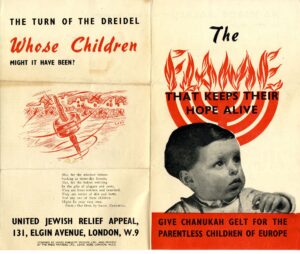 Chanukah, the holiday of lights, is associated with historic Jewish battles, bravery, and the renewal of the Temple in Jerusalem; a joyous time for children to play dreidel and enjoy Chanukah gelt and gifts. In the aftermath of the Second World War, Chanukah gelt needed to serve other purposes: to help children, survivors whose lives and families had been destroyed by World War II.

The United Jewish Relief Appeal, a British organization, published this fundraising flyer to remind potential donors that but for “the turn of the dreidel,” they and their children might have been victims of Hitler. The menorah, “the flame that keeps their hope alive” paints a flame of warmth and light, a hearth and home for children whose lives had been shattered. The life affirming blaze of the menorah contrasts with the red – and presumably bloody – images of people fleeing from war planes in despair as the whirling dreidel of fate twists in front of them. 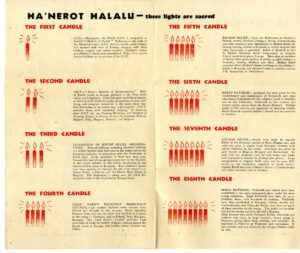 The flyer explains the eight candles lit on Chanukah; ascribing a candle to each organization and describing its relief work: supporting children’s homes all over Europe, providing children with food, clothing, medical services, schools, yeshivas, and vocational training, and helping them emigrate to Palestine. The poignant, heart-rending photographs illustrate how these organizations helped rebuild the children’s lives. The United Jewish Relief Appeal was the shamash, the “fund-raising pool” which “kindles and feed all the organisations engaged in relief work.”

The United Jewish Relief Appeal served, in a sense, as did the Maccabees of ancient times – a force enabling heroic children to lead free, independent lives, and explore and renew their identities as human beings and as Jews.

Funds raised by the Chanukah Gelt appeal assisted the United Jewish Relief Appeal to illuminate the lives of child survivors of the Holocaust – brands plucked from the flames – and offer them the tools, education, and atmosphere to restore their hope for a warm and bright future.

The flyer is from the Baruch Strauss Collection, MS. 1357.  Strauss was a noted Judaica book collector in London.  Yeshiva University purchased his collection in 1966 with the generous assistance of philanthropist Ludwig Jesselson.