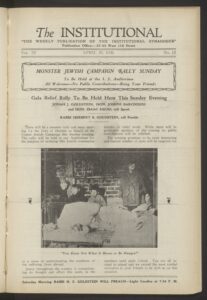 A new, large set of synagogue bulletins has been added to the Libraries’ existing digital collection of historic bulletins from Modern Orthodox synagogues in the New York City area. This new set adds over 1,400 issues to the current collection of bulletins from the Institutional Synagogue, a renowned congregation established in 1917 in Harlem that served as a center of religious, cultural and social life well beyond its immediate neighborhood.

The Synagogue Bulletins collection can be accessed through the Libraries Digital Collections portal.

Digitization of this set of bulletins has been generously funded by a grant awarded to the Libraries by the Harry and Jane Fischel Foundation.