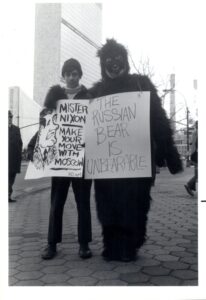 Half a century ago, in 1972, the Student Struggle for Soviet Jewry (SSSJ) organized “From Potma to Purim Vigil and Fast,” a demonstration on behalf of  Sylva Zalmanson and other prisoners of conscience in Potma, a notorious Russian labor camp. What were the prisoners’ crimes? They had expressed the desire to leave the Soviet Union and move to Israel.

The two-day vigil and fast took place in New York on February 27 and 28, in proximity to the Fast of Esther and Purim. The students voiced the hope that their actions would spur President Nixon to intercede with Moscow for freedom for Soviet Jews, as Queen Esther’s fast before Purim helped her plead with King Achashverosh to avert Haman’s evil decree to destroy the Jews.

A description of the event in a Student Struggle for Soviet Jewry press release explained: “The targets of the student fasters are both the United Nations and President Nixon, represented by the United States Mission to the U.N., a block away. Students wearing Nixon masks and bear suits will conduct a guerrilla theater, and letters taken from the USSR appealing to the U.N. and President Nixon for intervention will be read, interspersed with religious study sessions.”

Esther’s plea to the King of Persia succeeded and Jews survived to celebrate Purim until today. The Student Struggle for Soviet Jewry’s demonstrations, along with many other factors and actors, helped vanquish the Soviet Union. Jews were free to emigrate. The Soviet Union dissolved and in its stead democratic regimes emerged in much of Eastern Europe in 1991.

The Russian bear’s thirty-year long hibernation is over, and the bear is hungry. Let us hope that the Russian bear, the dov [in Hebrew], will be transformed into the dove of peace and the world will be able celebrate a post-Putin Purim in 2022 and beyond.