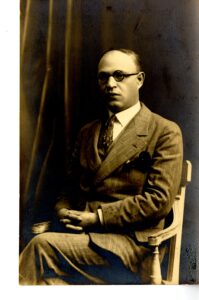 How do you say “Purim carnival” in Hebrew? Perhaps Purimta; it rhymes with the names of many of Haman’s sons, such as Parshandata and Vayzata. What about Pur-Rina? Or possibly Pur-Ditsa?  Daniel Persky suggested these terms in a 1932 contest to coin a Hebrew name for the Purim carnival in Tel-Aviv.  After all, the word carnival had Catholic overtones. And it certainly was not Hebrew.

Much as wordle has recently become a popular pastime, the 1932 contest to Hebraize the word “carnival” took Tel Aviv by storm. The contest was organized by Tel Aviv’s Purim Committee. The judges were five literary figures, including Sholem Aleichem’s son-in-law, Y.D. Berkowitz.

Daniel Persky was born in Minsk, Belarus, in 1887, and moved to the United States in 1906, where he devoted his life to the Hebrew language.  He taught at the Herzliah Hebrew Teachers’ College in New York  and was a weekly contributor to HaDoar, the Hebrew periodical, until his death in 1962. His patriotism for Hebrew extended to educational material for all ages; he was the editor of Eden, a short-lived Hebrew monthly magazine for children with games and cartoons. It was published in New York in 1924-5.  Persky’s stationery and business cards bore the motto, eved la-ivrit anokhi ad netsah = I am a slave of Hebrew for eternity. 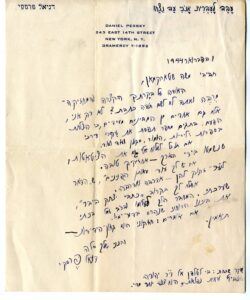 The variety and number of his activities on behalf of Hebrew testify to his dedication. 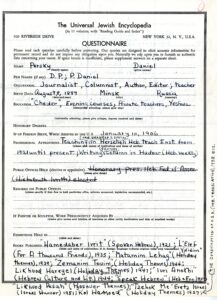 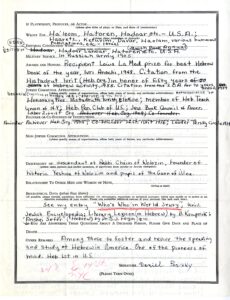 Between 1927 and 1933 Persky traveled in Europe and pre-State Israel, thus Purim of 1932 found him in Tel-Aviv, an eyewitness to the linguistic frenzy the contest engendered. The contest was open to all, not only to specialists.  Prior to the Purim contest, most Hebrew neologisms were decided on by individual intellectuals or scholars. The public nature of the competition, combined with the popularity of Purim, plus offers of cash prizes, captured the popular imagination. Persky described how one contestant cajoled others to divulge their suggestions by asking, “If you were going to suggest something, what would it be?” Some suggestions were: Purimyada, and La-Yehudim. The winning term, Adloyada was the brainchild of  noted Hebrew author Y.D. Berkowitz. Since Berkowitz was one of the judges, his win was criticized, but it was adopted nonetheless. The new coinage was based on the Talmudic statement  (Megillah 7b) by Rava, in Aramaic,  that on Purim a person should drink to the point where they are unable to distinguish (ad delo yada)  between “Cursed is Haman” and “Blessed is Mordechai.”

Although Persky’s entries in the Purim contest did not succeed, Persky did not abandon his linguistic Purim endeavors.  He suggested turning Purim into a verb: lehitparem – to enjoy, to let loose.  Or perhaps it was lehisparem, since Persky favored the Ashkenazic Hebrew pronunciation. Who knows, maybe the committee of judges in Tel-Aviv could not agree on how to pronounce Persky’s entry, Purimta or Purimsa,  and disqualified it?

Why didn’t Persky, the fervent Hebraist, settle in Israel? He is reported to have constantly said, “Next year,” when friends asked him when he was moving to Israel. Perhaps one issue was his linguistic objection to the Sephardic pronunciation favored by early Hebrew linguists, such as Eliezer Ben Yehuda. Another reason may have been his belief that the cause of Hebraism in America needed him. Persky certainly earned his credentials as an American Hebraist; he translated the United States Constitution into English.  And Dwight MacDonald, a New York intellectual, wrote an extended article on Persky,“The Slave of Hebrew,” in The New Yorker on November 28, 1959, a few years before Persky’s death.

Daniel Persky’s activities have fallen into obscurity; the efforts of American Hebraists have become an anachronism as the center of Hebrew language, linguistics, and literary activity shifted to Israel over the past century.

Daniel Persky died sixty years ago in New York on March 15, 1962, a few days before Purim and was laid to his eternal rest in Israel. 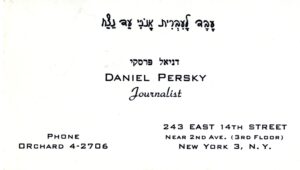