Putin, the Putative Pharaoh of Passover 2022

Passover raises thoughts and questions about slavery and freedom.  Me-‘avdut le-herut … mi-shi’bud li-ge’ulah – from slavery to freedom , from bondage to redemption – these phrases from the Pesach Haggadah [Mishna Pesachim 10:5] commemorate and celebrate the Exodus from Egypt. 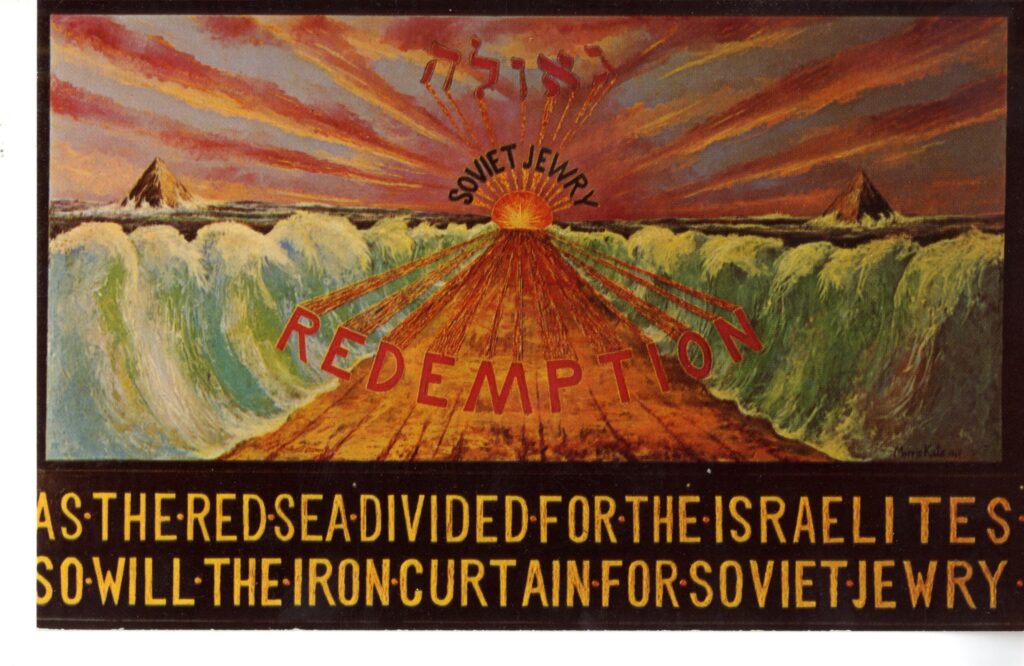 The Student Struggle for Soviet Jewry (SSSJ), spearheaded by Jacob Birnbaum, used biblical imagery to bring these fundamental themes to life in rallies starting in the 1960s in service of the cause of Soviet Jewry. These mass meetings protested the Soviet Union’s subjugation of Jewish religious freedom and human rights, and compared Jewish life under Soviet communist rule to the plight of the Israelites in Egypt. SSSJ slogans “Let My People Know” and “Let My People Go” were basic themes of a campaign for permission for Jews to study and practice Judaism within the Soviet Union, and the right for Jews to emigrate from the Soviet Union.

Jacob Birnbaum and SSSJ were demonstrating on behalf of two basic rights: freedom of religion and freedom of movement. Both these rights are enshrined in the Universal Declaration of Human Rights, a document adopted by the United Nations on December 10, 1948, as a response to the Second World War.  The Union of Soviet Socialist Republics was a member of the committee which drafted the document and was a signatory to it.

The Soviet Jewry movement played a role in ultimately breaching the Iron Curtain and opening the floodgates for Jewish emigration from the Soviet Union, and may well have contributed the collapse of the former Soviet Union in 1991. Jacob Birnbaum testified in Congress and worked closely with Senator Henry M. Jackson and Representative Charles A. Vanik to add the Jackson-Vanik amendment to the Trade Act of 1974. The amendment denied most-favored nation trade status to countries such as the Soviet Union which restricted basic human rights and emigration. In 2012, the amendment was repealed and normal trade relations were restored between the United States and Russia – a status that Russia jeopardized when it invaded Ukraine.

Jews were not the only victims of Communist repression of human rights and religion in the Soviet Union. A document in the SSSJ collection [52-1], collected by the organization in the course of its work gathering information on human rights violations in the Soviet Union, described the situation of Catholics in the Ukrainian SSR.  The undated memorandum [1969?], addressed to “To All Men of Good-Will and Believers in Freedom,” issued by the Ukrainian Catholic Bishops of the United States, requested prayers for the ‘Church of Silence’ of Ukraine, and appealed for world support for the suffering people of Ukraine in their quest of freedom.” Although the press release is a relic from the era of communist oppression of the Catholic Church in the Ukrainian SSR, it could almost be a plea for Ukraine’s current situation.

Other sections of the document describe conditions in Ukraine in the late 1960. It is not surprising that Ukraine chose independence from the Soviet Union in the decisive days of 1991!

For the past several months we have been receiving sad and discomforting news from Ukraine, where 46 million of our brethren are undergoing harsh treatment and persecution inflicted by the government of the USSR. Currently, the great powers are endeavoring to reach a measure of détente with the Soviet Union. The free press has been extremely careful not to report any occurrences and happenings behind the Iron Curtain which might upset the precarious balance of East-West relations. Yet the tragedy of the Ukrainian people under the domination of Russian communism is so overwhelming that no amount of censorship, official or tacit, can cover up the widespread suffering of the Ukrainian people.

Some among us believe that the post-Stalin Kremlin leadership was sincerely bent on peaceful coexistence with the West and would, as a consequence, be more tolerant as regards organized religion in the USSR. But no such thing came to pass. Yet the Soviet Union and the Ukrainian SSR are both signatories to the Universal Declaration of Human Rights, signed on December 10, 1948, which assures freedom of religion. Moscow makes much of this lip-service to freedom in its massive propaganda drives outside the USSR.

The Soviet Union is guilty not only of destroying the Ukrainian Catholic Church. It also annihilated the Ukrainian Autocephalous Orthodox Church in the 1930’s by slaying over 30 archbishops and bishops and 20,000 clergy and monks. It persistently harasses and persecutes other Christian adherents in Ukraine—the Baptists, Evangelicals, Seventh-Day Adventists, Jehovah’s Witnesses, and others—by imposing heavy taxation and by arresting pastors and preachers. The Soviet government is relentlessly persecuting the Judaic faith by closing down synagogues, molesting religious leaders and terrorizing worshippers.

The religious persecution in Ukraine is only one aspect of the oppression of the Ukrainian people. For the past few years hundreds of Ukrainian intellectuals have been arrested and tried by Communist courts in Ukraine simply for opposing the Russification of Ukraine and demanding the application of the provisions of the U.N. Declaration of Human Rights and of the Soviet and Ukrainian SSR constitutions as well.

On May 14, 1964, a great fire destroyed the library of the Ukrainian Academy of Sciences in Kiev; a few months later a library employee was sentences to 10 years of imprisonment for the deed. Among the priceless manuscripts destroyed were records of Ukrainian folklore, literature and history, including documents of the short-lived independent state of Ukraine. Then, on November 26, 1968, another fire destroyed the Church of St. George at the Vydubetsky Monastery in Kiev, along with irreplaceable Ukrainian and Hebraic manuscripts. The suspicion in general that these mysterious fires were deliberate acts of arson on the part of the KGB to wipe out archives that could have been strong rallying points for Ukrainian nationalist sentiments and ideology.

The memorandum closed with a plea signed by three American Ukrainian Catholic Bishops, beseeching people to:

Intercede on behalf of the persecuted 46-million Ukrainian nation with your government by making it keenly aware of the incessant violation of human and national rights of the Ukrainian people by the Soviet government, a member of the United Nations and a so-called champion of the ‘national liberation’ of the colonial peoples of Africa and Asia.

In doing so, you will be lending invaluable moral support to the suffering people of Ukraine, thus providing them with a ray of hope in their martyrdom and misery, reminding them that they are not alone or forgotten by the peoples of other countries who are blessed with the good fortune to live in freedom under a government of their own choosing.

Ukraine became an independent nation in 1991. The current war, in a sense, is reminiscent of Pharaoh chasing the Israelites after the Exodus from Egypt. Pharaoh wanted to capture his former slaves, his human capital.   Putin wants Ukraine returned to the orbit of the Soviet Union – perhaps for the Ukrainian breadbasket, perhaps for its minerals such as lithium, for power – for any number of reasons, or perhaps for reasons only Putin can fathom. 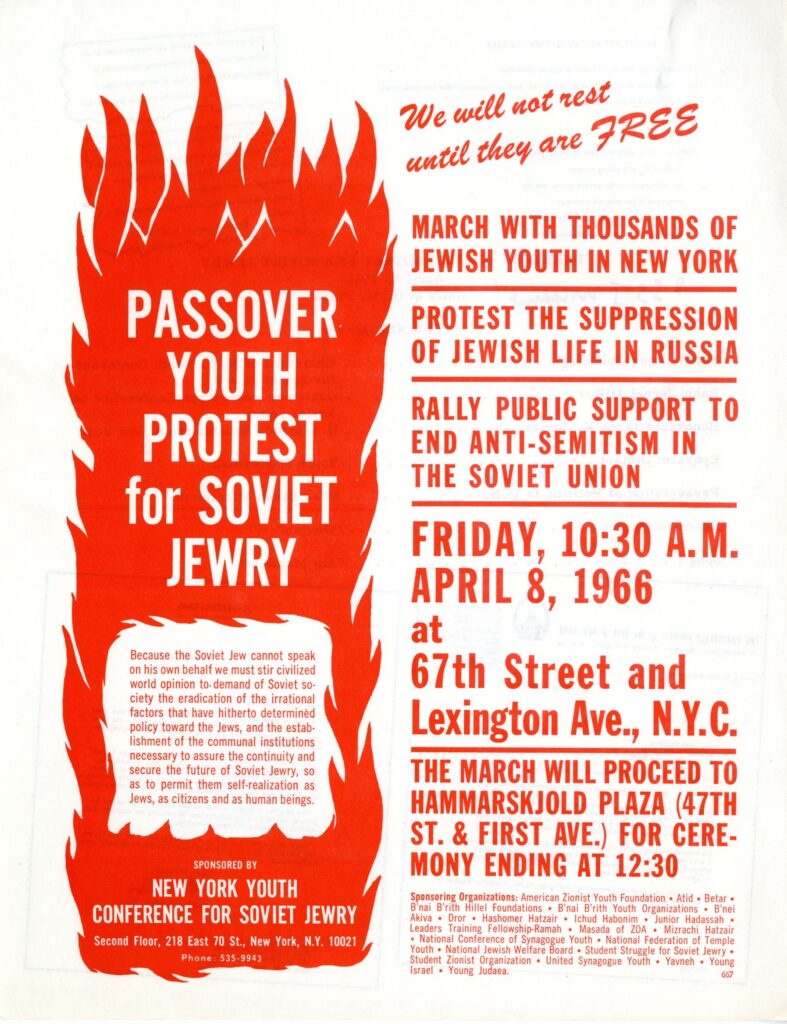 SSSJ demonstrations typically took place near the United Nations. SSSJ always obtained all the proper permits, and the rallies were legal and well-organized, a lesson that peaceful protest is powerful. Students marching in the Geulah – Redemption Passover vigil in 1966 paraded with a mural painted by Morris Katz for SSSJ for the event. The mural depicted the parting of the Red Sea, and equated the Soviet Union of the 1960s and its treatment of Jews with ancient Egypt and the enslavement of the Israelites. 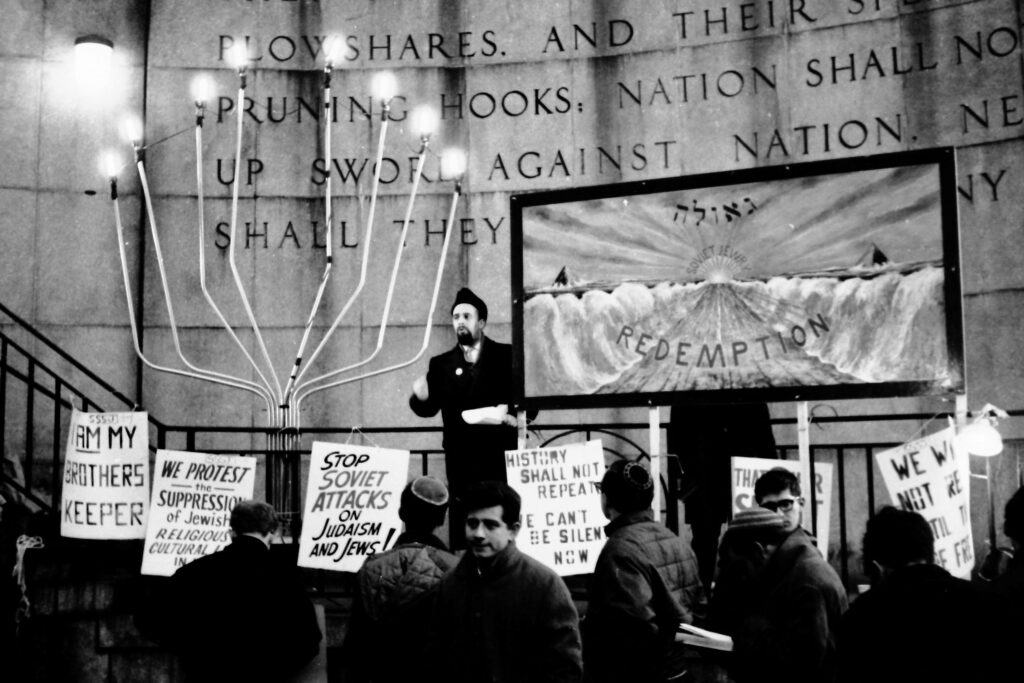 The parting of the Red Sea is arguably the high point of the Exodus from Egypt – God miraculously created a safe corridor for the Israelites to escape Egyptian pursuit, and Pharaoh and his warriors were duly engulfed by the sea as it returned to its shores. May Russia return to its borders and rest in peace.

Let us hope the words of Isaiah [2:4], carved in large letters on the Isaiah wall near the United Nations, “They shall beat their swords into plowshares. And their spears into pruning hooks: nation shall not lift up sword against nation, neither shall they learn war any more,” shall come true speedily in our days.