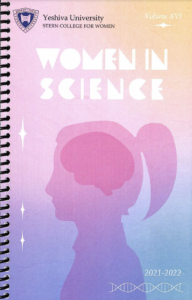 It’s a feather in several caps.

Two undergraduate research publications have been added to YAIR, thanks to Stephanie Gross, Electronic Reserves and Scholarly Communication Librarian and YAIR creator. Both publications—Women in Science and Derech HaTevah—highlight the achievements of budding Stern College scientists and the explosion of intellectual and professional opportunities for women.

The inspiration behind the publications was Harvey Babich, Professor and Chair of Biology and mentor to hundreds of Stern College alumnae. Behind him in Women in Science lay the helping hands of many, including Karen Bacon, Mordecai D. and Dr. Monique C. Katz Dean of Undergraduate Arts and Sciences, and the STEM departments of Stern College, each with its own disciplines and honors programs. The goal is greater than scientific literacy. Rather, according to the introduction, “A science education at SCW is a stepping-stone to any career and a cornerstone of our students’ success.”

Over the past two years of the pandemic, which might normally have hindered productivity worldwide, SCW students and faculty met through labs and hybrid Zoom/in-person lectures to continue their research. Their participation proved “how vital scientific progress is to humanity and how vital humanity is to scientific progress.” Articles and photos on various phenomena are interspersed with lists of publications and projects undertaken by the student body. 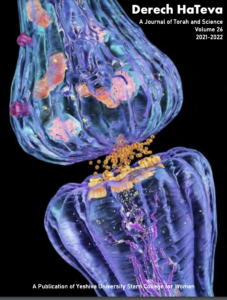 Derech HaTeva (The Way of Nature) takes the researcher beyond the lab—rather, the walls of the beis midrash, study hall. Ancient Jewish law and lore are skillfully applied to contemporary STEM topics. The most current issue, dedicated to the memory of Rabbi Dr. Moshe Tendler, zt”l–supreme rabbinical figure and expert in medical law and Jewish bioethics—explains its goal to carry on his work and influence in keeping with Yeshiva University’s commitment to Torah U’Madda: symbiosis of faith and science.

Articles range from the offbeat: “Allergies and their Impact on Tefillin Observance,” Shani Adest; to historical: “Pathologies of the Gut and their Treatment During Talmudic Times,” Eliana Farkas; and to the humorous “How Cow! Between Meat and Milk; a Scientific Explanation for Waiting,” Naomi E. Fried. Weight-Watchers, beware: some articles, like “Overeating: High Calorie Intake on Shabbos,” by Sima Greenberg-Zucker, prove that some issues in Jewish living remain, alas, timeless. Earlier issues are also available on YAIR.