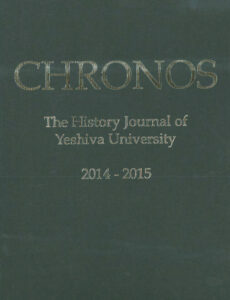 Right on the heels of Women in Science and Derech HaTevah comes another addition to YAIR: Chronos, The History Journal of Yeshiva University. Unlike the science journals, which are focused exclusively on Stern College for Women, Chronos, the latest online migration led by Stephanie Gross, represents a joint venture of the entire YU student body, with greater gender parity among its contributors.

Under faculty advisor Hadassa Kosak, Associate Professor of History, Chronos has become “the forum dedicated to celebrating student scholarship and research on an expansive array of historical topics.” From monarchs and warriors to philosophers and artists, articles represent all figures and periods–religious as well as secular, Jewish as well as non-Jewish—reflecting eclectic interests in scholarship. There are also guest faculty authors; an article by Joshua Zimmerman, Eli and Diana Zborowski Professorial Chair in Holocaust Studies and East European Jewish History and Professor of History, appears in the most current (2021-2022) issue: “The Rise of the Ukrainian National Movements in Austrian Galicia.” How tragically relevant to our present day and crisis.

Never in the university’s existence has the past become so pertinent. In an era where events seem to be unfolding and converging at the speed of light, and key figures capture attention like actors on the world stage, Chronos provides analysis that is moving beyond the parochial. What was once viewed chiefly through Jewish lenses and Jewish interests is now gleaned for vital universal lessons.

In the words of the journal introduction:

Internalizing the past is not just intellectually broadening, it is not only a path toward world appreciation, but it is a character trait, an ethical and moral prerogative. Living with history, we are privy to its depth and power, respectful of the larger narrative within which we occupy.