A Lag Ba-Omer Pilgrimage to the World’s Fair, 1940 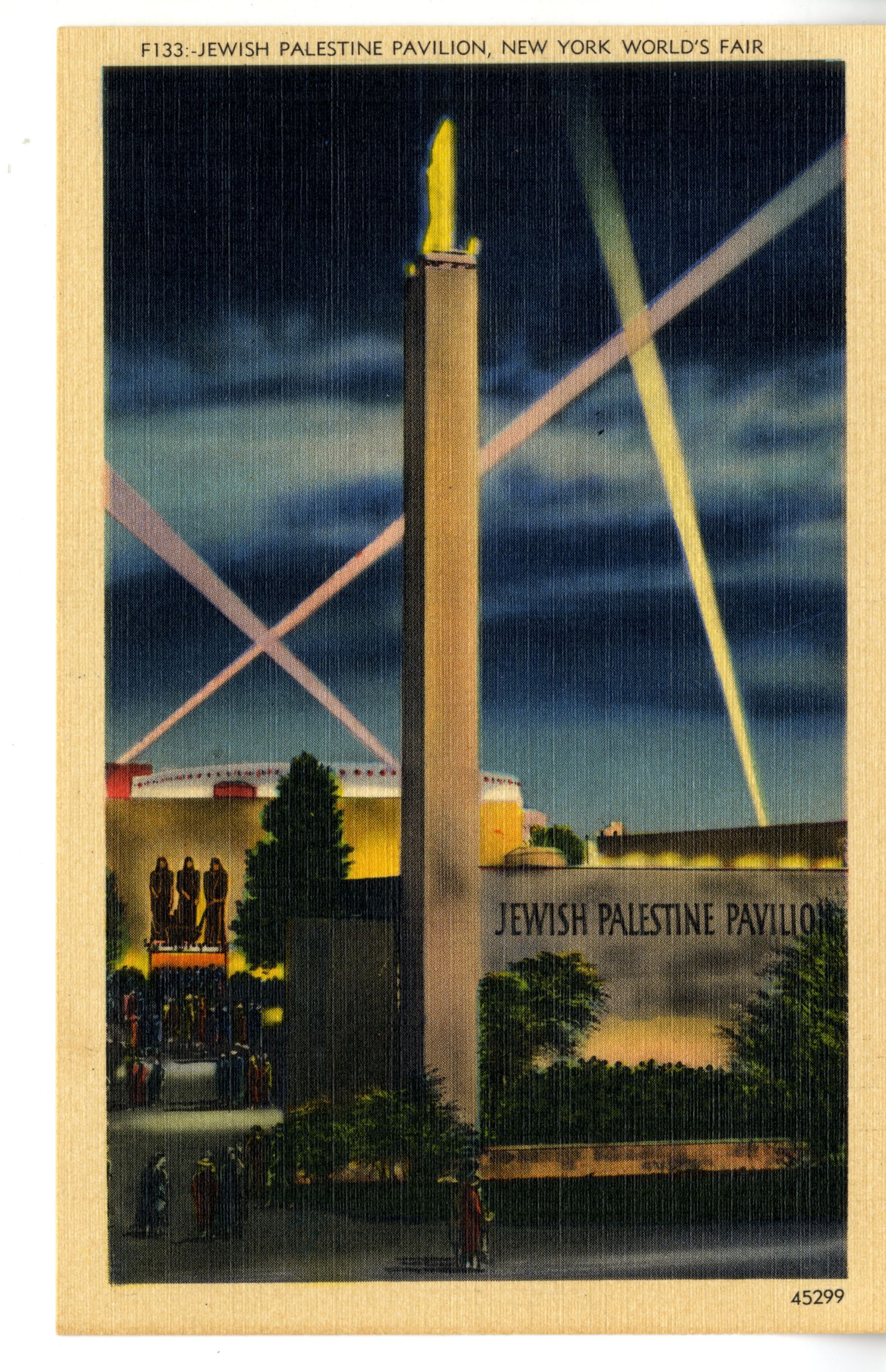 On May 26, 1940, the New York Times  daily column,  “Program for Today at the World’s Fair,” announced an event at the Temple of Religion: a symposium on the “role of Orthodox Jewry in promoting Jewish education among Jewish youth by Dr. Bernard Revel, Dean of Yeshiva College, Rabbi Joseph H. Lookstein, Dr. Samuel Nirenstein, chairman, Union of Orthodox Jewish Congregations, … and others.” 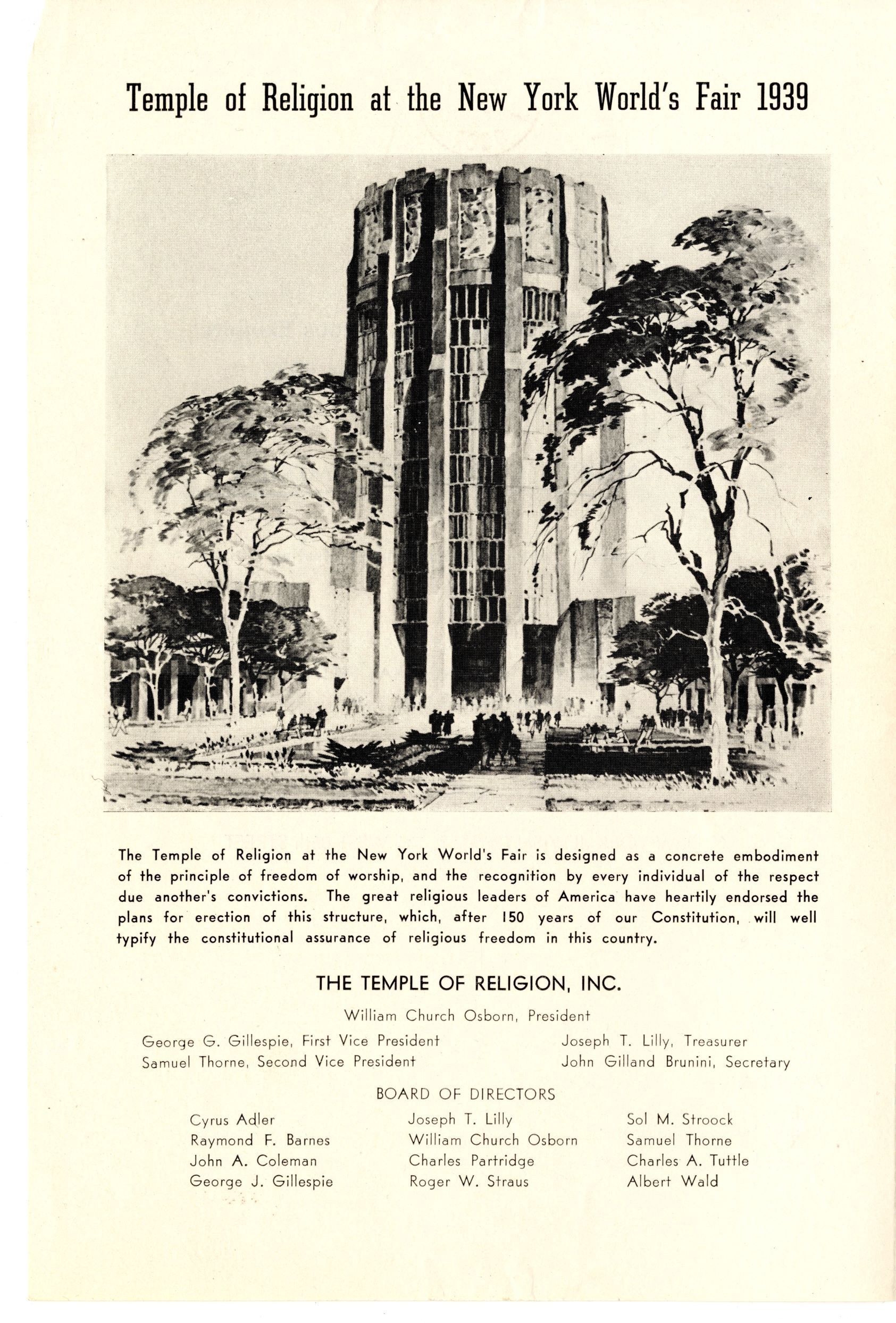 May 26, 1940, was Lag B’Omer, the thirty-third day of the omer period between Pesach and Shavuot, the forty-nine day count from liberation to revelation.   Revel characterized Lag B’Omer as “the day which symbolized the indestructability of the Jewish spirit,” in his address at the first public meeting of the Orthodox Union’s Jewish Religious Education Board. Revel was presumably referencing the plague which killed 24,000 of Rabbi Akiva’s students during the omer period but ceased on Lag B’Omer. The plague was attributed to the lack of honor and respect the students exhibited to one another. Rabbi Akiva was arrested and martyred by the Romans for teaching Torah in defiance of their edict.  Lag B’Omer is also a holiday of light, of bonfires lighting the dark, in memory of Rabbi Akiva’s student, Rabbi Shimʻon bar Yoḥai who is reported to have died on Lag B’Omer and is legendary for spending twelve years in a cave hiding from the Romans and studying Torah.

Revel’s topic was the importance of traditional religious Jewish education to the future of the Jewish people, hence the connection to Lag B’Omer and to students, who represented the Jewish spirit and future. Revel also connected Jewish teachings to the history and spirit of democracy, including American democracy, and expressed the idea that Torah and its students will bring light to the world and ensure the future of Judaism, ideals which were under siege during the Second World War.

The challenge of the sinister forces of hate, intoxicated with their temporary might, who seek to extend their domain of darkness and the frontiers of frightfulness over all mankind, must be met by all who believe in light and right, in the cherished values of mankind, the values man has striven and bled for through the ages. All who are true to the spiritual and cultural destiny of mankind must mobilize themselves against the recrudescence of bloody paganism, so that the achievement of ‘centuries of progress,’ the traditions, hopes and ideals of aspiring humanity, may not perish, and the light of the spirit of G-d within man may not be extinguished.

In this supreme struggle between light and darkness, for human equality and freedom, for the sanctity of human personality and reason, our beloved country ‘conceived in liberty and dedicated to the proposition that all men are created free and equal,’ and forever blessed and sanctified by such dedication, stands as a mighty bulwark for human freedom; it abides by its priceless heritage.  Its soul will forever remain attuned to the ringing message of the Bell of Liberty and the Bill of Rights. Life will have meaning and will be worth living only as long as it continues to ring.

… The stronghold of human freedom reared by Washington, Jefferson, Lincoln and their fellow patriots, was of penetrating vision, founded upon the realities of a living and creative faith, upon the spirit of the Bible, stands today more than ever before, as a guide and inspiration to all mankind. ‘American democracy has grown out of the spiritual well of the Bible.’ The Bible was the cornerstone upon which was reared the enduring structure of our national life, it was the guide and inspiration of the sturdy and steadfast settlers of the land and their followers, who made it truly free.

The heritage of Judaism through its tragic and triumphant millennial history is of continuous and basic significance to the spiritual life and progress of mankind. Its spiritual strain is civilization’s source of strength in its struggle for survival and ascendancy.

Democracy, love of freedom and justice, is the great affirmation of Judaism, Israel’s most cherished ideal and aspiration. For our passion for freedom, peace and righteousness, we have been hated and persecuted by enemies and misunderstood by our friends. But love of light, learning and liberty will forever remain our sacred burden until it becomes the heritage of all mankind….

It is the hope of all who have the cause of Jewish survival at heart, of all who wish to see a spiritually aspiring and culturally creative, that the work of the Jewish Board of Education marks the dawn of a new era in our spiritual progress, vigorous, intensive, and creative Jewish life, drawing its inspiration from and guided by the idealism of our Torah in harmonious union with the forward looking forces of our age, with unanimous loyalty to the ideals of our beloved country.

We behold the guiding hand of Divine Providence in the fact that before the spiritual sun of Israel had set over Europe, sanctuaries of the eternal soul of Israel have been established on this continent.”

Revel was cognizant that the war in Europe might devastate world Jewry  and emphasized the importance of “a sound system of Jewish education, culminating in the Yeshiva.”

“The Yeshivoth are the successors to the sanctuaries of the Torah of all ages, …lighthouses of learning and spirituality, on the stormy sea of our millennial history, uniting Israel in spiritual aspiration and loyalty to the G-d of our fathers, lighting the way to creative faith and spiritual steadfastness. In the spirit of devotion to the ideals, aspirations, immortal teachings and traditions of ‘Kenesses Yisroel,’ the Yeshivoth take a place in this land, commensurate with the unique responsibilities of American Jewry in our tragic days and their opportunities for the development of a creative Jewish life and Jewish education, our only sources of strength in our struggle for spiritual survival.

The lofty ideals of our Torah, of truth, of everlasting life and light, of Divine and human love and loyalty, will again manifest themselves as a living and creative force, helping shape the cause of human progress on its ever upward march….”

The audience members who stayed until the end of the symposium, and its message of both despair and hope,  were treated to “Jewish Religious Music,” according to the listing in The New York Times.  In addition to the Orthodox Union,  the event was also sponsored by the Morgen Zshurnal, the Yiddish newspaper the Jewish Morning Journal, which Revel described as “for over a generation the authoritative voice of traditional Judaism in this country.”

The program for the Orthodox Union’s Board of Religious Education took place at the Temple of Religion, a pavilion at the World’s Fair ‘designed as a concrete embodiment of the principle of freedom of worship, and the recognition by every individual of the respect due another’s conviction. The great religious leaders of Americas have heartily endorsed the plans for erection of this structure, which after 150 years of our Constitution, will well typify the constitutional assurance of religious freedom in this country.” 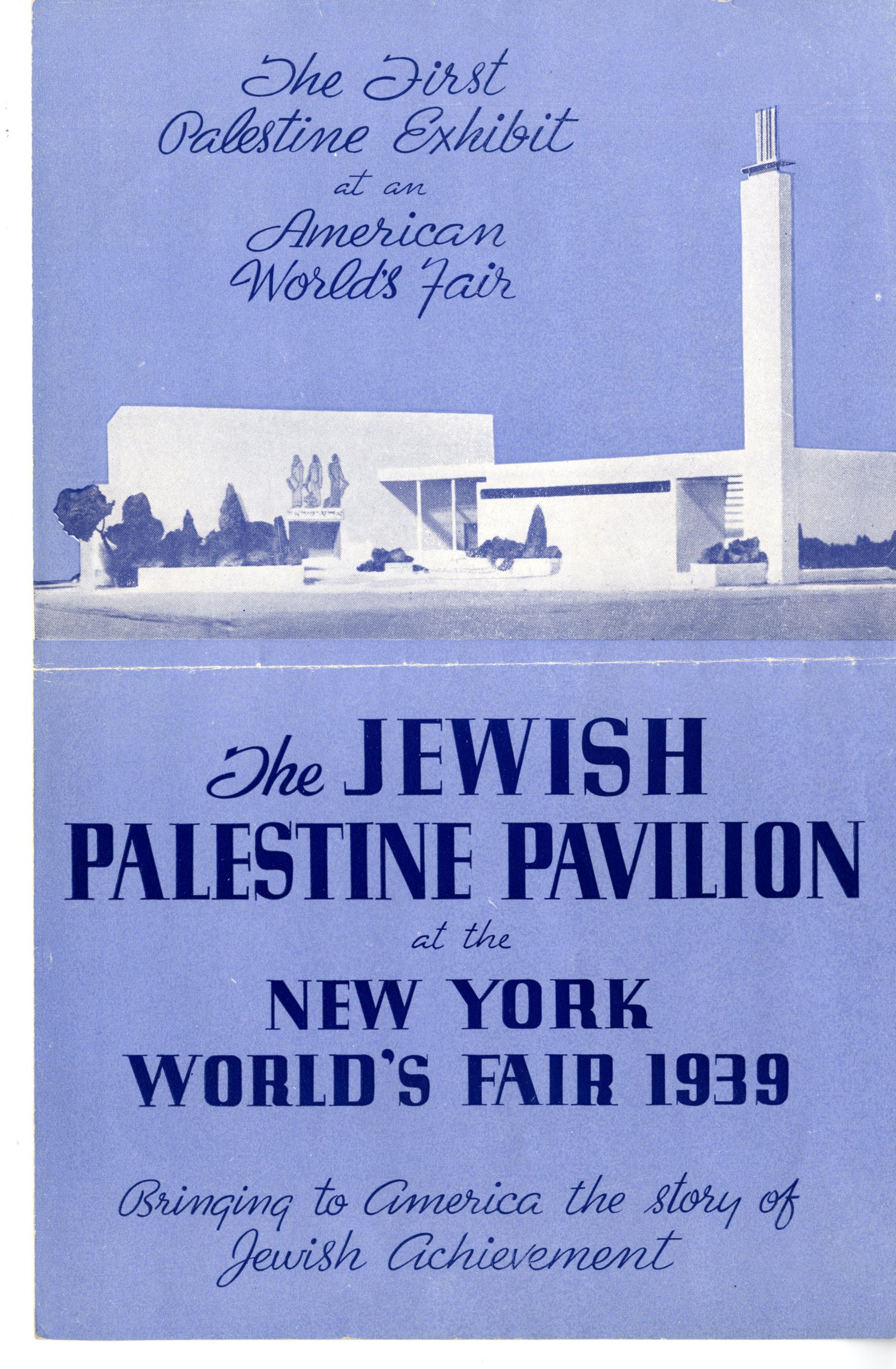 Jacob Hartstein, a long-time faculty member and administrator at Yeshiva University, was a member of the Washington Heights and Inwood Committee for Jewish Palestine Pavilion; most of the images in this post are from his papers. 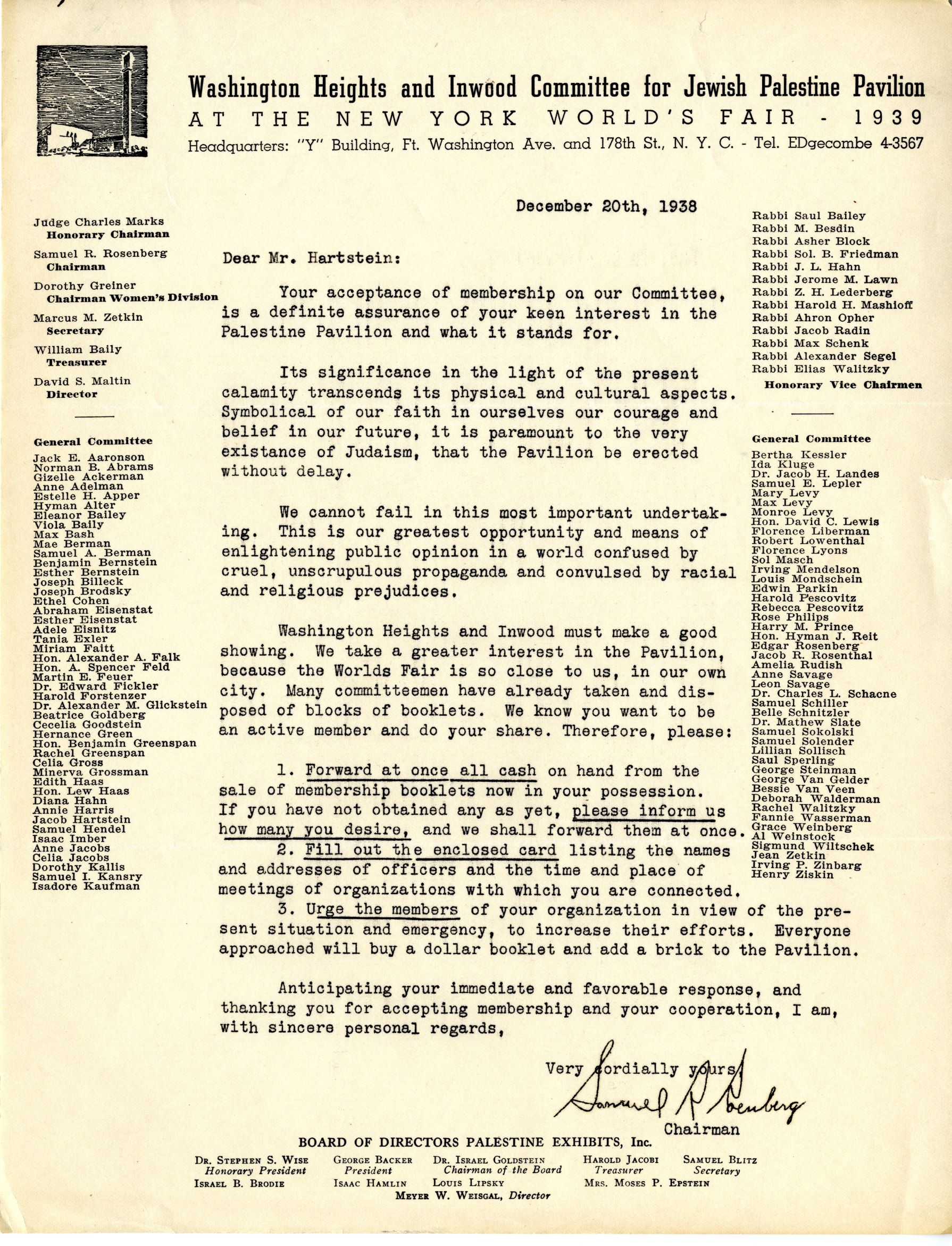 Revel mentioned the Jewish Palestine Pavilion in his address, in the context of his observations of the world of 1940. Revel reflected on the state of the world and its relationship to the Fair, and the slogan of the fair, which had changed from “The World of Tomorrow” in 1939 to “Peace and Freedom” in 1940, a commentary on the mood of a world at war. 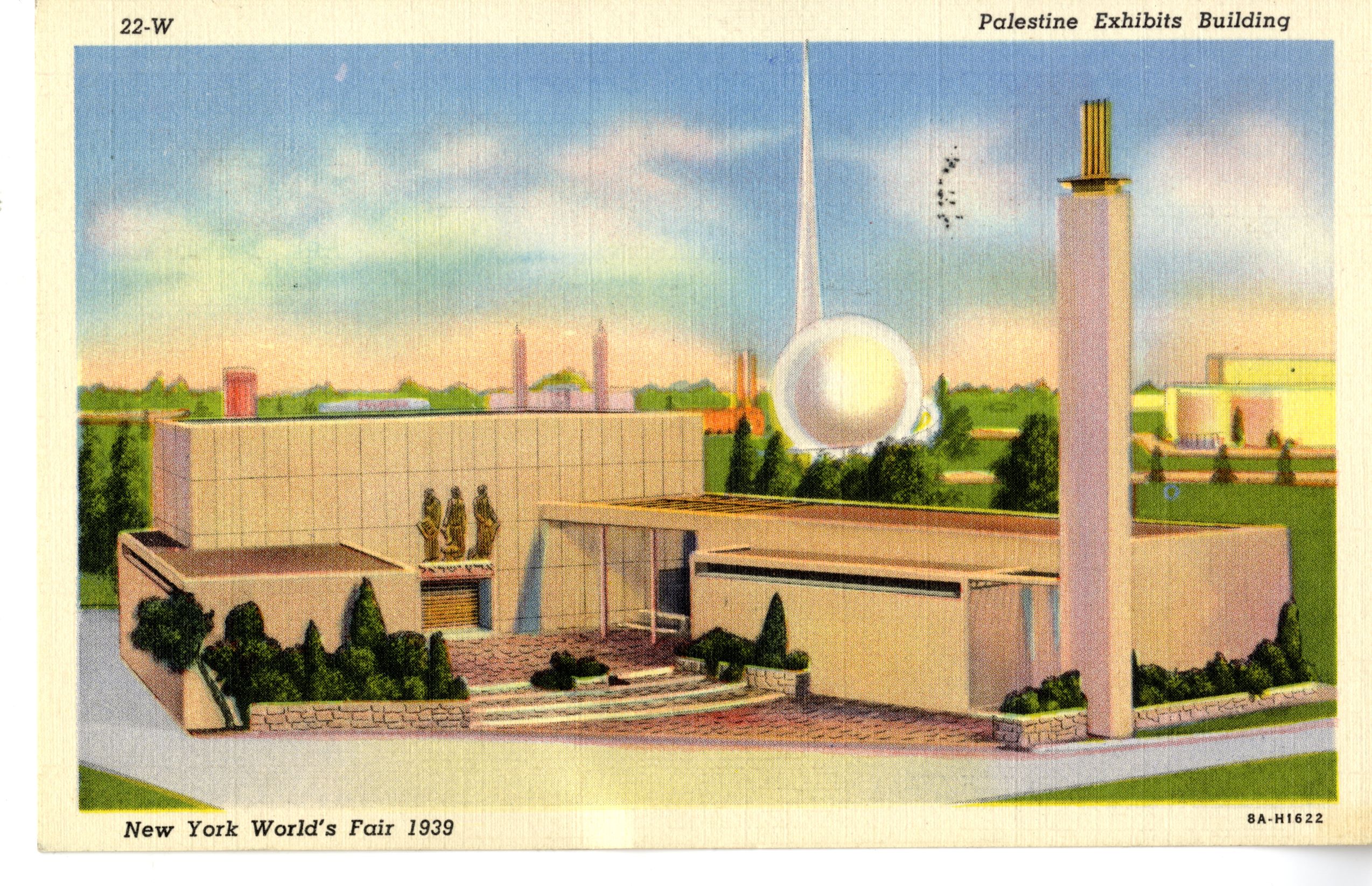 Yeshiva University Archives
Jacob Hartstein Papers
[Jewish] Palestine Exhibits Building. “This pavilion, built about a patio reminiscent of the age-old Mediterranean tradition, houses an exhibit of the concrete achievements of the Jewish people in the rebuilding of their National Home. El-Hanani is the architect.”

Last year this Fair was dedicated to the ‘World of Tomorrow. This year it is concerned more with the world of today, or with what is left of a world divided and at war with itself … Near us stand some national pavilions without a country, victims of the Teutonic fury: The Czechoslovakian and Polish pavilions. … Yet these national pavilions without a country are no mere fiction; they are symbols, as is the [Jewish] Palestinian pavilion, of a greater reality.

For the status imposed upon these nations by the forces of hatred and destruction are but a passing shadow, a nightmare in the dark night which has descended upon mankind. A new day, the day of the Lord, will dawn upon suffering humanity, and justice, peace and freedom, and spiritual harmony will ultimately triumph. The slogan of ‘Peace and Freedom’ truly proclaims ‘The World of Tomorrow.’

Revel died in December 1940, six months after his speech at the World’s Fair, and did not live to see the end of World War II. May his message of peace, echoed in the over eighty-year-old motto of the World’s Fair, be fulfilled.

Coda:  A piece of Yeshiva College joined the World’s Fair as a permanent resident: A Yeshiva College publication, Portraits of Eminent Mathematicians by David Eugene Smith, was selected to be part of a Westinghouse Company time capsule, capable of lasting 5,000 years, which buried at the site of the World’s Fair on September 23, 1938. Portraits of Eminent Mathematicians was an offshoot of Yeshiva’s periodical, Scripta Mathematica. Scripta Mathematica was the brainchild of Yeshiva College mathematics professor Jekuthiel Ginsburg, editor of the quarterly from its inception in 1932 until his death in 1957.

Sources: “Performing the State: the Jewish Palestine Pavilion at the New York World’s Far, 1939/1940” by Barbara Kirshenblatt-Gimblett, in Kirshenblatt-Gimblett, Barbara, and Jonathan Karp. The Art of Being Jewish in Modern Times. Jewish Culture and Contexts. Philadelphia: University of Pennsylvania Press, 2008, pp. 98 – 115