King David and the Shavuot Connection

Opening page of Book of Tehillim, Amsterdam, 1724. Mendel Gottesman Library, on loan from Richard and Debra Parkoff, in honor of Abraham and Ruth Parkoff.

Tehillim, the Book of Psalms, is traditionally attributed to King David.  David was also known for his musical abilities.  He was first introduced to the realm of royalty when he was a young man; he was summoned to King Saul for his musical ability.  King David’s talents are on display in this tranquil gouache paint illustration, a scene far removed from the accounts of his complicated life and his battles with his enemies and his children. This is the world of Ashre, the person who is happy to study Torah day and night. Floral motifs in the illustration evoke traditional Shavuot decorations.

This volume of Tehillim is part of a magnificent edition of Mikra’ot Gedolot, a Rabbinic Bible, published in Amsterdam between 1724 and 1728 by Moses ben Simeon Frankfurter (1672-1762). Frankfurter’s monumental edition is known by the title Kehilot Mosheh. Other volumes in the library’s edition have variations on the opening word panel: some are illustrated in a manner similar to this one, although this one is only partially executed; the initial word of the Book of Psalms, Ashre, which presumably would have been drawn by a different hand than the illuminator who created the drawing, was never filled in.

Here is a more complete panel from the Bamidbar,  the Book of Numbers, this week’s Torah reading, customarily read before Shavuot: 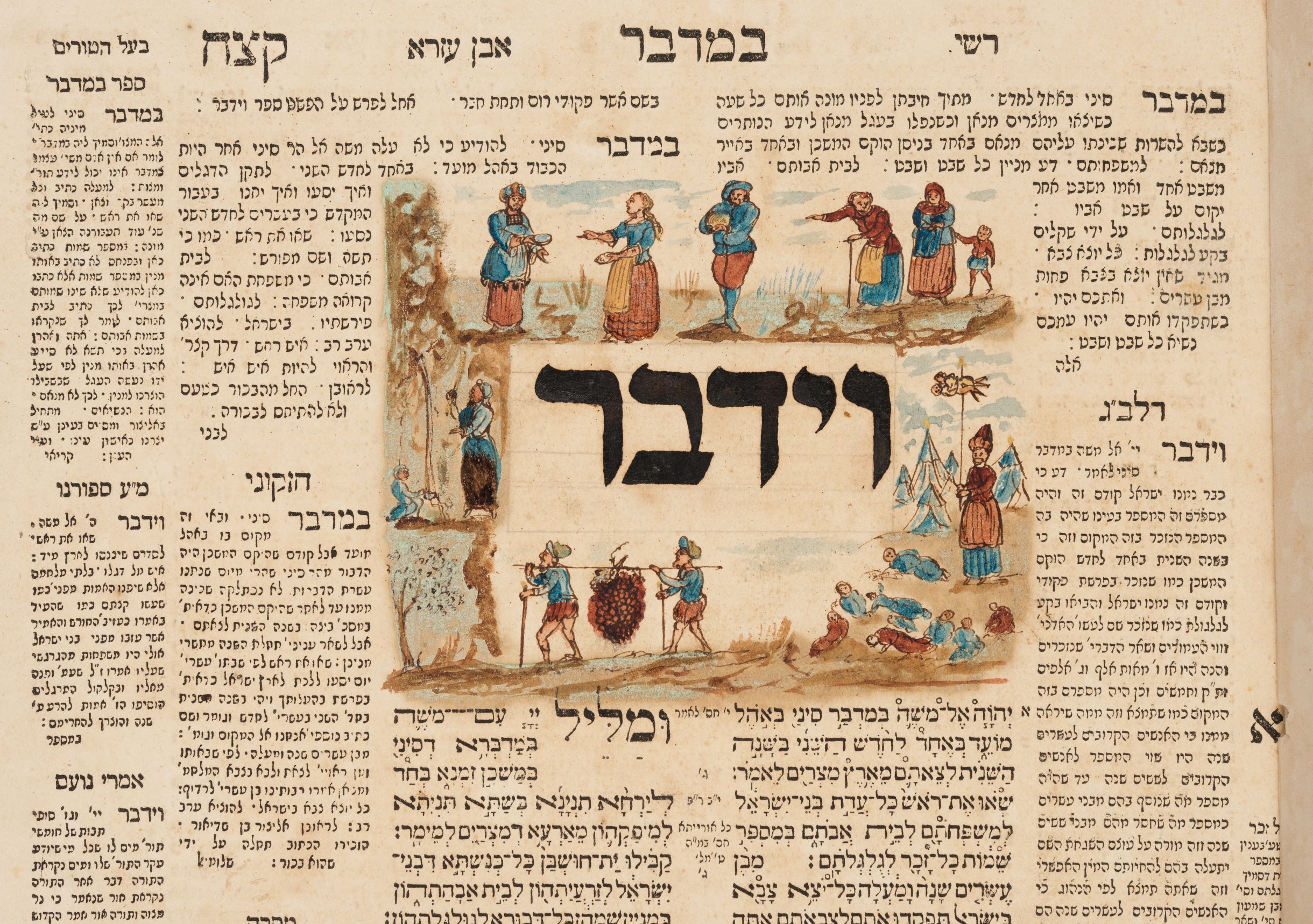 Opening page of Book of Numbers, Amsterdam, 1724. Mendel Gottesman Library, on loan from Richard and Debra Parkoff, in honor of Abraham and Ruth Parkoff.

Other volumes include printed woodcuts, and some have blank spaces indicative of an original intent for the empty panels to be illuminated. By the 1720s, the age of print was already well-established; by the mid-eighteenth-century manuscripts were experiencing a revival as objects of prestige: perhaps this hybrid edition of print and picture hearkened back to the age of the hand-written illuminated manuscript, or it is an example of a phase in the development of the interplay between print and manuscript as both media evolved and influenced one another, particularly as luxury possessions. 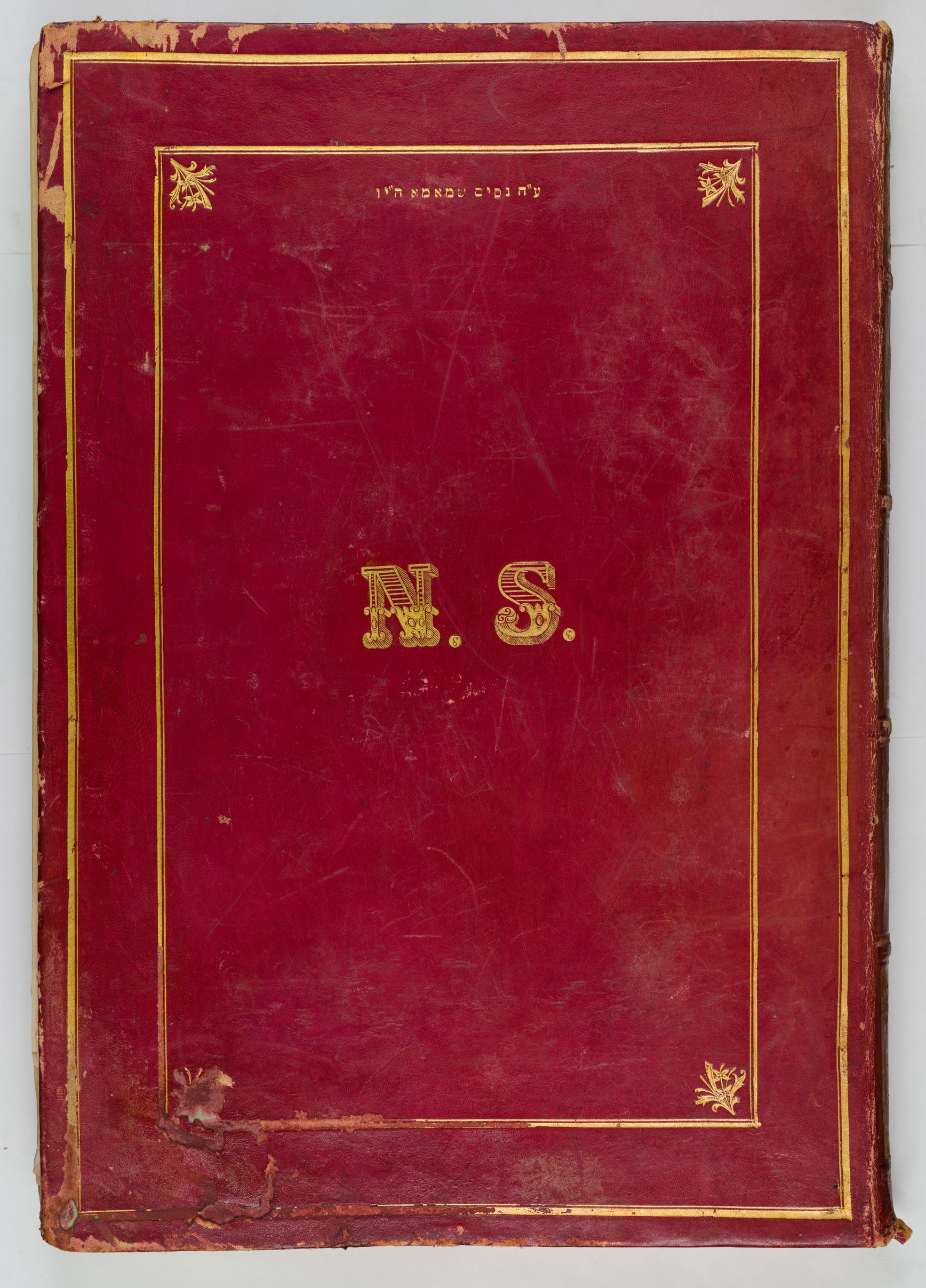 Cover of Kehilot Mosheh, Amsterdam, 1724. Mendel Gottesman Library, on loan from Richard and Debra Parkoff, in honor of Abraham and Ruth Parkoff.

Indeed, this set of Kehilot Mosheh is unique; there is a similar, but not identical set, a fraternal twin, at the National Library of Israel.  In addition to the illustrations, which distinguish this set from other printings, the four volumes of Kehilot Mosheh were split and rebound in fourteen smaller volumes. Each volume is bound in nineteenth century red Morocco gilt, with the initials N.S. and the name נסים שמאמא stamped in gold on the cover.  N.S. stands for  Nessim Samama (1805-1873). Samama rose to high positions in the Tunisian government and became the qāʾid; (head) of the Jewish community in Tunisia. In 1864 he went to Paris with 20 million gold francs to negotiate a loan for Tunisia. However, he stayed in Paris, moved to Leghorn in 1871, and never returned to Tunisia. Samama died childless; his estate was subject to extensive litigation by his relatives as well as the Bey of Tunis who tried to recover some of the funds Samama had taken to Paris. A number of books were written about the legal case. Perhaps these regal volumes of Kehilot Mosheh were part of his estate.

Imagine studying Torah on Shavuot from these magisterial, historical volumes!

This unique set is on loan to Yeshiva University Libraries through the generosity of Richard and Debra Parkoff, in honor of Abraham and Ruth Parkoff.