Update Your Bookmarks and Library e-Resource Links in Canvas 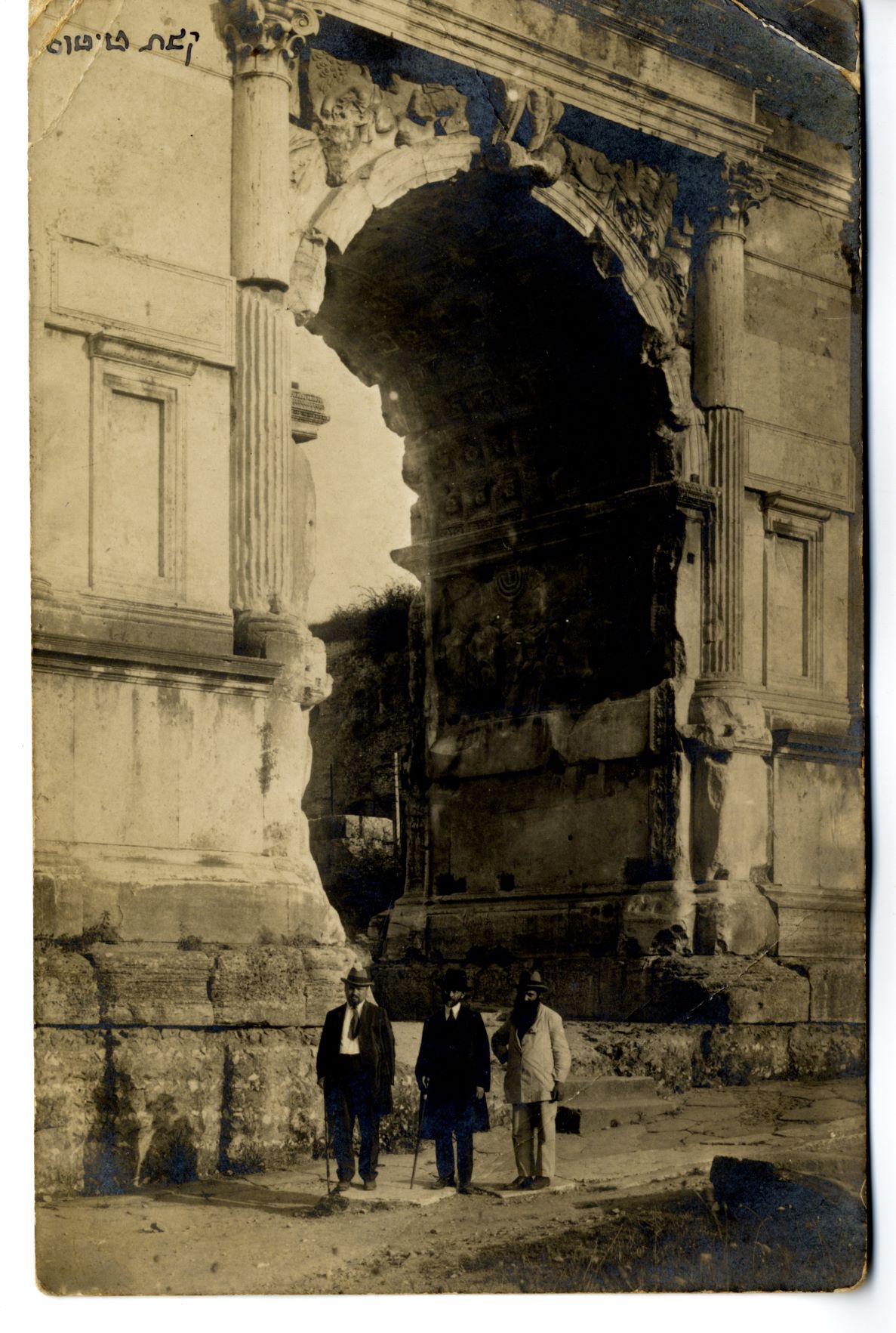 Rabbi Judah Leib Ha-Kohen Fishman Maimon is in the middle, flanked by Rabbi Meir Bar-Ilan [originally Berlin] on the left and Rabbi Shmuel Hayim Landau [Shahal] on the right. They are standing beside the Arch, not under it; the Spoils panel is visible in the background behind them. The perspective indicates how massive the Arch of Titus is in comparison to the men. Gift of the Leah Adler z”l Memorial Fund. This image was also published in a biography of Rabbi Shmuel Hayim Landau,, He-Mered Ha-Kadosh by Shabtai Don Yehiya, Tel Aviv: Moreshet, 1960, p. 125.

The Arch of Titus in Rome looms large in Jewish history. Titus, Emperor of Rome from 79 – 81 C.E., is infamously known in Jewish lore as Titus Ha-Rasha, Titus the Evil, since he destroyed the Second Temple in Jerusalem in 70 C.E. To celebrate his victory over the Jews, a triumphal parade was held in Rome, the high point of which was  the display of holy vessels from the Temple. The famous Arch of Titus in Rome was built by Titus’ brother, Domitian, a decade after Titus’ death.  A panel on the inside of the arch depicts the spoils of the Temple carried by triumphal Roman soldiers. The arch, erected to commemorate the Roman victory over Jerusalem and the Jews, was viewed by Jews as a symbol of destruction, defeat, and exile. Indeed, modern legends have it that generations of Jews refused to walk under the arch as a form of defiance of the Roman victory, walking under the arch would appear to be a form of Jewish subjugation to Titus.

Despite the Jewish humiliation evident in the arch, as time passed,  it became a symbol of Jewish survival and resilience, and a site of Jewish pilgrimage, an important stop on a Jewish grand tour. After all, where else could someone see depictions of the menorah and other sacred objects from the Temple, fashioned not long after the destruction of the Temple, possibly modeled on the actual vessels themselves?  The imaginative tourist could even fantasize that the objects themselves were embedded in the arch. 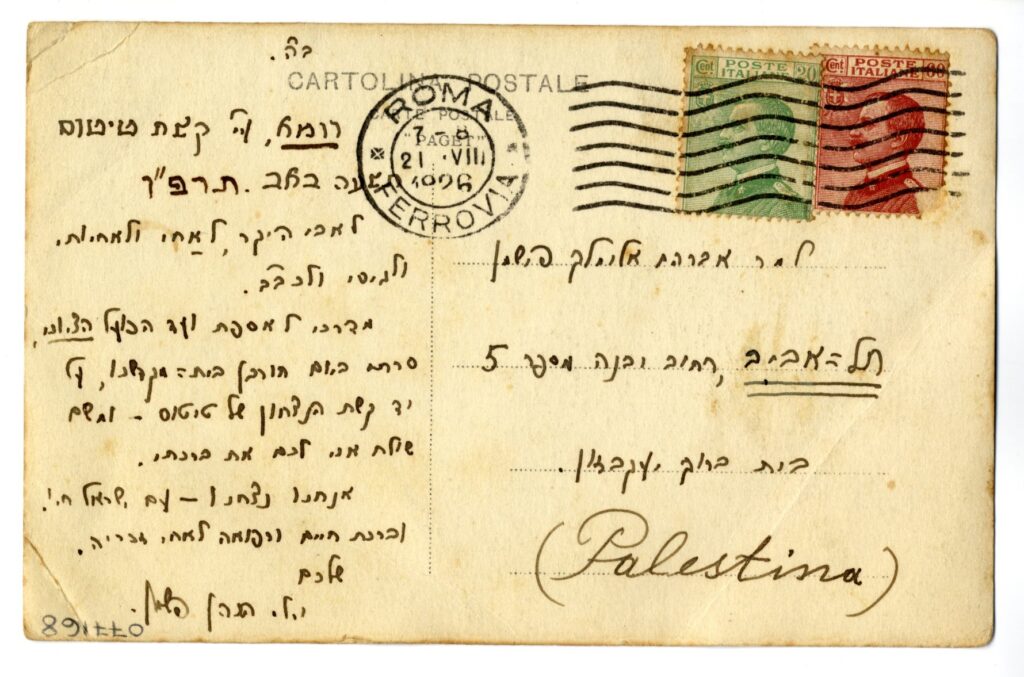 A display of pride in Jewish endurance, despite the destruction and sacking of the Temple, is reflected in this photo postcard penned by Rabbi Judah Leib Fishman Maimon on 9 Av 1926 [July 20, 1926] in Rome and sent to his father in Tel Aviv the following day.

“On my journey to the congress of the Va’ad Ha-Poel Ha-Tisyoni [Zionist General Council] on the day of the destruction of our holy Temple, I went to the Victory Arch of Titus – and I send my greetings to you from there.  We won! Am Yisrael Hai! [The People of Israel live!]”

Who was the triumvirate at the arch in the photo? These three men were key figures in Mizrachi, the Orthodox Zionist movement; they were on their way to the Zionist General Council meeting in London in August 1926. Rabbi Fishman Maimon (1875-1962) was exiled from the Land of Israel during World War I by the Turkish authorities; Rabbi Bar-Ilan (1880-1949, youngest son of the Netsiv) was forced to leave Germany during World War I since he was a Russian citizen; both men spent the war years in the United States where they were active in the growth of the American Mizrachi movement. Rabbi Bar-Ilan established the Mizrachi Teachers Institute in 1917; it became part of the Rabbi Isaac Elchanan Theological Seminary in 1921. Rabbi Bar-Ilan was President of RIETS during Rabbi Dr. Bernard Revel’s absence.  He moved to pre-state Israel in the 1920s.  Rabbi Fishman Maimon returned to Mandatory Palestine immediately after World War I. He was one of the founders of Mossad HaRav Kook.

Rabbi Shmuel Hayim Landau (Shahal) (1892-1928), a scion of the Kotzk Hassidic dynasty, became active in Mizrachi in Poland and was active in the formation of the Ha-Po’el Ha-Mizrahi and the creation of the philosophy of Torah va-Avodah, the importance of religion and labor in building the Land of Israel.  He made aliyah in 1926; he died in 1928 at the age of thirty-six so his legacy is little known today.

All three fathers of Mizrachi were born in Eastern Europe; by 1926 all were living in British Palestine. Their decision to visit the Arch of Titus on 9 Av, the day of mourning for the destruction of the Temple is symbolic.  They were on their way to a Zionist conference, and wanted to make the statement that the Jewish people have outlived the ancient Romans, Jews are eternal. They made sure to photograph the event and record it for posterity; perhaps there were photographers in the area tourists could hire. A Baedeker guide to Rome from 1927 lists a number of photographers located in Rome.  The photo was printed in the form of a postcard; the term “Paget” on the postcard refers to the type of photographic paper which was utilized.

A computer generated replica of the panel of the Spoils panel of the Arch of Titus, commissioned by the Center for Israel Studies, as part of the Yeshiva University Arch of Titus Project.  It is currently on display in Furst Hall. Imagine how Titus would feel if he could see his victory procession with its Temple vessels ensconced under a Jewish roof!

I would like to thank Zalman Alpert for identifying Rabbi Shmuel Hayim Landau, and Professor Steven Fine,  Zvi Erenyi, and Tina Weiss of Yeshiva University, and Rachel Misrati of the National Library of Israel, for their gracious help.