Libraries Update | September 8, 2022 A Queen of Valor, Who Shall Find? 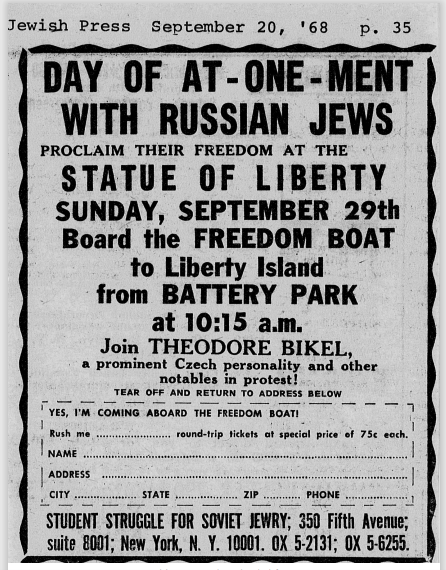 Do you remember marching with your friends at the Student Struggle for Soviet Jewry (SSSJ) rallies in the 1960s, 1970s, and 1980s?  You can now easily recapture those days of activism, the era of the fight to free Soviet Jews trapped in Russia under the Communist regime, simply by using the internet. This period of relatively recent Jewish history — when Jews were oppressed by a frequently antisemitic Communist regime — is almost unknown to contemporary college students. Ironic, since college students, including Yeshiva College and Stern students, formed the basis of the SSSJ.

Just in time for Rosh HaShanah, the New Year, there are new ways to access and search the Student Struggle for Soviet Jewry (SSSJ) Collection, bringing new life to the documents.  Much of the collection, one of the ones most frequently consulted by researchers in the Yeshiva University Archives, is now accessible online.  Researchers no longer need to travel to New York to view the SSSJ documents.

Reveal Digital selected the SSSJ material as part of its carefully curated “Student Activism”  site, and digitized the documents which cover the SSSJ’s activities from its founding by Jacob Birnbaum in 1964 until the parting of the Iron Curtain under Mikhail Gorbachev in 1989.

The digitized SSSJ material is now completely searchable; simply put a word in the search box!  For example, if you searched “freedom” there will be a number of results.  One result is an advertisement from the Jewish Press for a Freedom Boat Ride to the Statue of Library on September 29, 1968.  That date fell on the Sunday between Rosh HaShanah and Yom Kippur, hence the pun “at-one-ment;” American Jews will unite with their Soviet brethren and become one in the season of atonement.  Other documents indicate that Rabbi Steven [Shlomo] Riskin was going to lead the event, and that the sounds of the shofar of freedom would ring out in front of the Statue of Liberty. 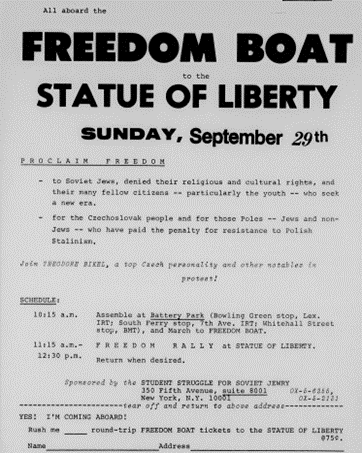 SSSJ rallies frequently focused on Jewish holidays and utilized their traditional meanings and the power of their symbols to infuse meaning into the demonstrations. When Gorbachev visited New York in 1988, SSSJ was there to “greet” him and make sure he understood their message. His visit took place on Hanukkah; SSSJ distributed a handsome flyer at a “Lights for Freedom Rally.” 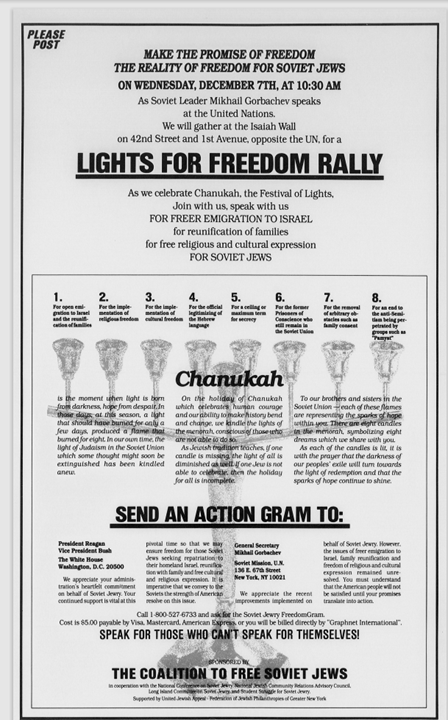 The sound of the shofar sends many messages; even though no shofars were blown at the Hanukkah protest, the cry of the shofar was not forgotten. “Speak for those who can’t speak for themselves!” is one of the messages of the shofar, and it was the call to action of the SSSJ.  The SSSJ students’ cri de coeur finally felled the Iron Curtain, enabling Soviet Jews the freedom to forge their own destiny.

Oral history interviews with SSSJ activists, conducted by Glenn Richter, former National Coordinator of the SSSJ in the 2000s, may be accessed at Soviet Jewry Movement Oral History Project