A Queen of Valor, Who Shall Find? 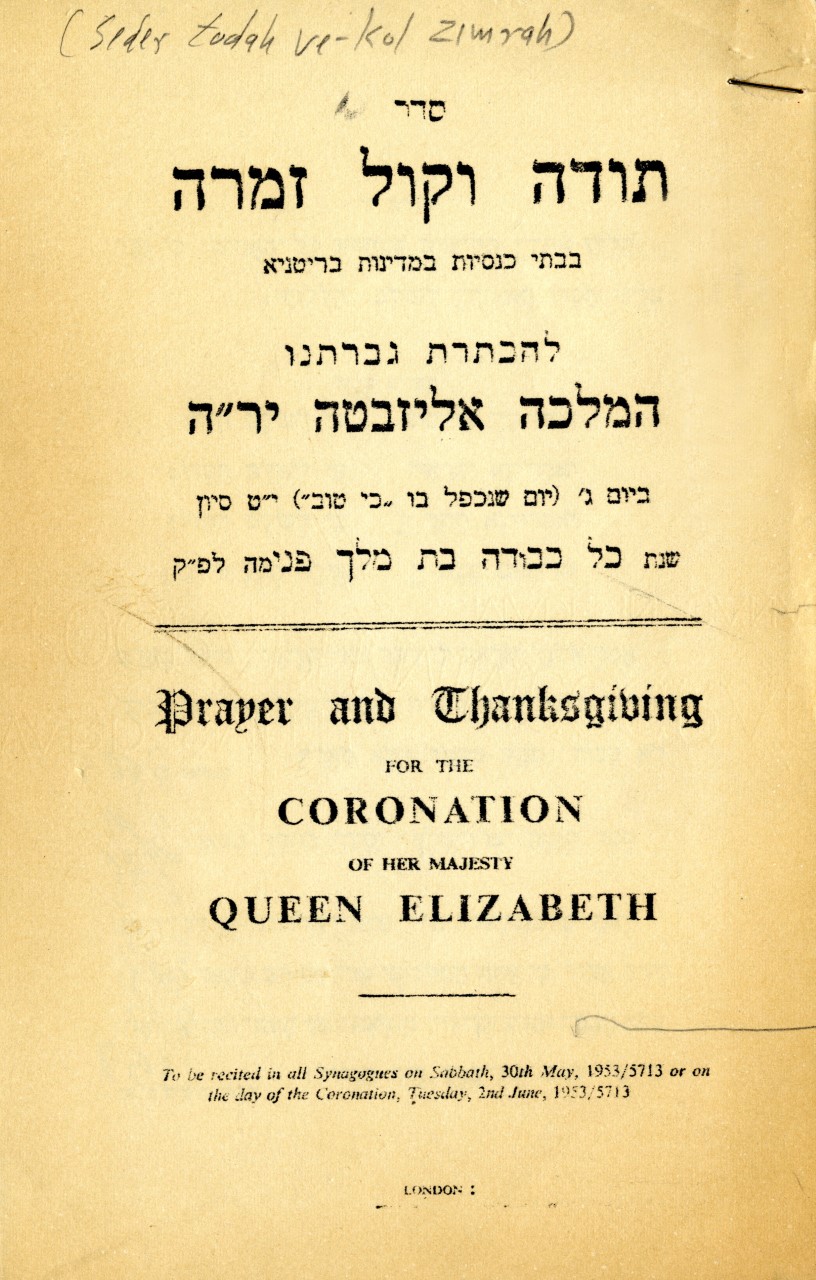 It is traditional for Jews to pray for the welfare of the country they reside in and for its leaders to be blessed with health and wisdom to rule justly. Regime change is often a cause for potential instability in any form of government, thus it is an auspicious time for the Jewish community to reiterate its loyalty to the government and to pray for its rulers.

A slim booklet, Prayer and Thanksgiving for the Coronation of her Majesty Queen Elizabeth, was issued by the British Chief Rabbinate; it is a service “to be recited in all Synagogues on Sabbath, 30th May, 1953/5713 or on the day of the Coronation, Tuesday, 2nd June, 1953/5713.”   The title page of the booklet is in Hebrew and English, as is the service itself, which consists primarily of Psalms. The Hebrew chronogram for the date is derived from the bold letters in the verse,

[kol kevudah bat melekh penimah], a princess enters [the palace] with her [valuable] belongings [Psalms 45:14], generally interpreted by later commentators in the Talmud and rabbinic literature as a prescription that a woman’s place is in the home; a women is  honored by having the liberty  to stay inside and not having to  brave the outside world. Although historically this phrase is viewed by the rabbis as instruction in proper female behavior, in the case of Queen Elizabeth II the phrase was almost prophetic. She was a regal and stately public figure who reigned during a period of great changes in society and in the role of women and rose to the challenge, yet always remained a reserved and dignified monarch.

The Jewish community in Britain fared well under Queen Elizabeth’s rule. Jonathan Sacks, the previous Chief Rabbi, was knighted by the Queen in 2005 and entered the House of Lords in 2009. In a constitutional monarchy, the line of succession to the throne is generally predestined; the prayer for Queen Elizabeth II’s coronation in 1953 already including a blessing for four-year-old Crown Prince Charles. In the British monarchy, an orderly chain of elevation to the monarchy continues; after Queen Elizabeth’s death, and after composing a prayer in her honor with references to  Eshet Hayil, “A Woman of Valor”  Chief Rabbi Mirvis announced, “…for the first time, we prayed for “our Sovereign Lord, King Charles.”

Thank you to Tina Weiss, Head Librarian of Hebraica-Judaica, for her suggestions.