During his tenure, Senator Lieberman was the only Orthodox Jew in Congress. In 2000, he was the […] 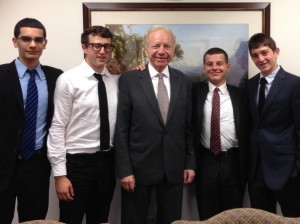 During his tenure, Senator Lieberman was the only Orthodox Jew in Congress. In 2000, he was the Democratic Party’s nominee for Vice President, but lost in a close and conflicted election. In the Senate, his support for Israel was unwavering, as it continues to be, despite his retirement from politics.

We spoke to him about his political future and asked if he would be open to serving in a Presidential Cabinet. We also discussed his past runs for President and Vice President. He shared his thoughts on the Israeli-Palestinian Peace Process, and he told us his views on the situations in Egypt, Syria, and Iran.

It was a truly unique experience, and we were honored to have met with such a distinguished individual like Senator Lieberman. Thank you to those that organized the meeting.

On behalf of Hatzioni, I must say that we are really looking forward to another great year of many more Hatzioni activities and events, and we urge all interested students (especially freshmen!) to get involved and become members.