On Wednesday, May 28th, the students of Yeshiva University High School for Boys filed into Lamport Auditorium to watch a special movie awards ceremony. Although MTA has hosted a number of film competitions over the last several years, this one was special.  Doug Hemmig, a representative of CSPAN – the public broadcasting company – was […]

On Wednesday, May 28th, the students of Yeshiva University High School for Boys filed into Lamport Auditorium to watch a special movie awards ceremony. Although MTA has hosted a number of film competitions over the last several years, this one was special.  Doug Hemmig, a representative of CSPAN – the public broadcasting company – was there to present Honorable Mentions to two MTA boys, Yisroel Loewy (’15) of Fair Lawn, New Jersey and Shimmy Socol (’16) of Flushing, Queens, for “Made in America,” a film they produced as part of C-SPAN’s StudentCam video competition, which prompts students to “produce short documentaries of national importance.” The objective this year was to create a film about an issue that Congress should address in the coming year. 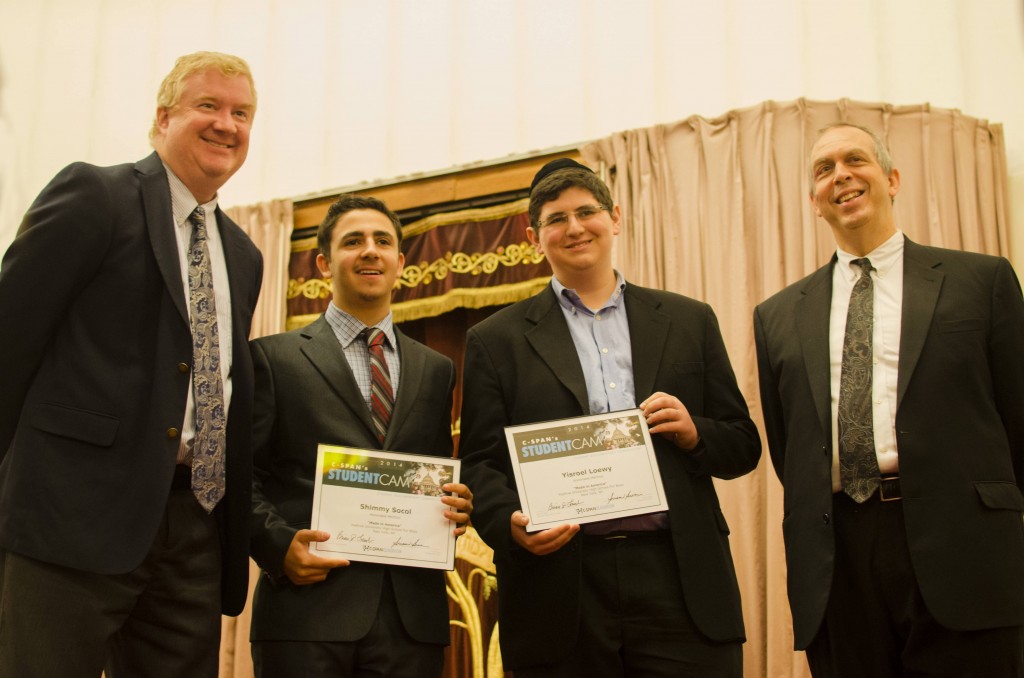 “Made in America” is an argument for the repatriation of American manufacturing across the food, apparel, and technology sectors. The film maintains that a return to American manufacturing will yield dividends down the line, in the form of greater employment and faster access to higher-quality goods. In making the film, Loewy and Socol hoped to catch Congress’s attention on what they feel is a critical issue. “As an American,” Socol said, “I feel it’s important to support our economic growth, and to concentrate on our national employment rate.”

Doug Hemmig, the representative from C-SPAN, noted the importance of recognizing Loewy and Socol’s production. “There are 4,300 total entries, and only 150 winners” he observed, “and to be here to celebrate one of them is outstanding.”

The boys shot the film on a digital SLR, and edited the footage in Final Cut on a Macbook Pro over the course of several days. True to their technological passions, Loewy and Socol were influenced by some of the very equipment that they used in the filmmaking process; Loewy noted, “We discovered StudentCam at the same time that Apple released their new 2013 Mac Pro. Apple emphasized how they were trying to move jobs back into the states beginning with their new “Made in America” Mac Pro, and we wanted to echo that.”

Both boys credit their high school with providing ample opportunity to pursue their passion for film. Loewy mused, “MTA has offered an abundance of support and resources to us in order to aid in our filming. Anything from equipment to software.” And Socol volunteered “With the many special events that occur at MTA throughout the year, I am privileged to be able to capture these events, and at the same time hone my skills as a film-maker.” As part of their award, Loewy and Socol have received $250, a windfall they just might put toward their next award-winning film. And inspired by C-Span’s StudentCam, they’re aiming their lenses on another documentary.