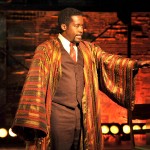 On Wednesday, Mrs. Levitt, along with Dr. Taylor, Mr. Kulnis and the entire 10th grade made their way to Harvey Theater at Brooklyn Academy of Music. “Amazing, marvelous, uplifting and truly inspiring.” These were the words said in response by the audience to the play The Tallest Tree in the Forest. […]

On Wednesday, Mrs. Levitt, along with Dr. Taylor, Mr. Kulnis and the entire 10th grade made their way to Harvey Theater at Brooklyn Academy of Music. “Amazing, marvelous, uplifting and truly inspiring.” These were the words said in response by the audience to the play The Tallest Tree in the Forest. The play, a one-man show played by Daniel Beaty grasped many by surprise with his amazing voice and his astonishing portrayal of the 20th century activist, Paul Robeson.

Star player on Rutger’s football team, along with many extra curricular activities, he still managed to graduate valedictorian of his class and obtained a scholarship to Colombia Law School where he ended up becoming a lawyer. The African American life was a true struggle. This was no different for a lawyer. The racism, the critics and the pressure, it was all there. But being a lawyer is not what he wanted, his astounding voice pushed him to become a singer that he always wanted to be. Meeting his wife Essie, she is portrayed as “forcing” herself onto him making her his wife and eventually his manager. Essie kick-starts his acting and singing career.

Daniel Beaty, while portraying over 40 voices between men women and children, he also sings provisional and inspirational songs of Paul Robeson. The opening song, “Ol’ Man River” is perhaps Robeson’s more profound songs which was sung by Robeson himself in Show Boat and later sung in a 1936 movie.

With his fame climbing to its highest, he makes his way to the Soviet Union. But first, he stops off at Berlin where he sees how Nazi Germany has been treating minorities and while there, he and his wife get questioned because of her skin color. Thankfully, they make it away safely. As he makes his way to Russia, he is appalled to arrive to thousands of people who have heard of him and what he is doing. He is happy to see that there is no such discrimination against minorities and he wants this for his for people around the world and especially in the United States. In Russia, races mean nothing, which he shows compassion for. Little did he know, back in the U.S., he is under interrogation for being pro-communist Russia. When he returns to the U.S. his career begins to deteriorate bringing an end to his career and eventually his life.

As the play comes to an end, the crowd was in awe as they were able to see the emotion in Beaty’s eyes and the end to Robeson’s life and the play. On behalf of the entire 10th grade, I would like to thank all those part of the production and for the opportunity to find out about an amazing and inspiring person in the U.S.