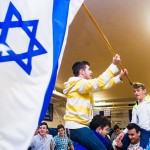 On Thursday morning at MTA, the scene was blue and white. MTA students started off the day with an inspiring davening led by Rabbi Tani Cohen followed by words of chizuk from Rabbi Taubes. Rabbi Taubes explained to […] 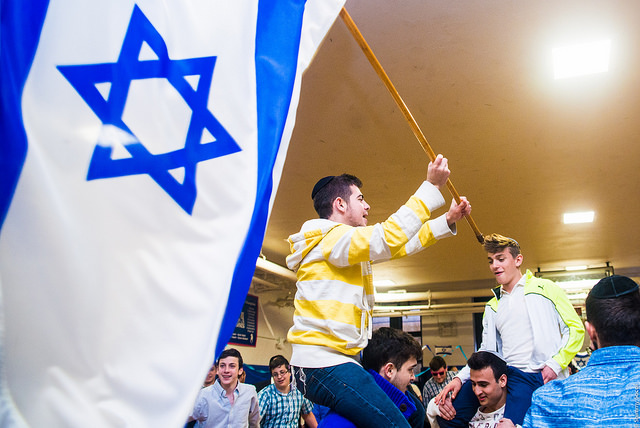 On Thursday morning at MTA, the scene was blue and white. MTA students started off the day with an inspiring davening led by Rabbi Tani Cohen followed by words of chizuk from Rabbi Taubes. Rabbi Taubes explained to us that we are living in a generation where we don’t readily recognize what Hashem has given us. We take for granted the opportunity to go to Eretz Yisrael, whether to visit, to spend a summer, or to learn for a year or two. But until just 67 years ago – and for about 2,000 years before then – the Jewish nation was without a home of their own. When we then said Hallel, the reciatation was so much more meaningful, as we can now indeed better appreciate the gift that Hashem has given to our generation.

Following davening, students went to their respective shiurim and learned a little about Yom Ha’Atzmaut and Eretz Yisrael in general – with a spice of Torah making the day feel more complete. Immediately following shiur, students and faculty went down to The Den and enjoyed what people were saying was the best Yom Ha’Atzmaut chagigah in MTA history!

The chagigah began with some breif additional divrei chizuk from Rabbi Taubes, who then introduced Mr. David Leshaw, our Director of Admissions, who announced that he and his family will be making aliyah this coming summer! This was followed by a a very spirited and high energy firsat dance set. We then had the honor to hear a dvar Torah from Rabbi Shulman which included reflections on his own experience learning in Israel, and a message about how we have to have bitachon in Hashem and why we should celebrate Yom Ha’Atzmaut. After a rocking performance by the MTA band, another dance set finished it all off. The dancing was inspiring to everyone and sent a message to everyone as to how much we all care about our precious homeland.