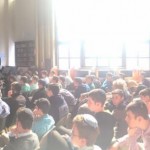 Yom HaShoah: Remember the Past to Build the Future

This past Thursday was Yom HaShoah, Holocaust Remembrance Day, in observance of which we had an inspiring assembly commemorating the 6 millionlives that perished during the Holocaust.  Nearly a month ago, many MTA classes started reading a fantastic book called 70 Days for 70 Years. This sefer is comprised of 70 eclectic essays ranging from pure […]

This past Thursday was Yom HaShoah, Holocaust Remembrance Day, in observance of which we had an inspiring assembly commemorating the 6 millionlives that perished during the Holocaust.  Nearly a month ago, many MTA classes started reading a fantastic book called 70 Days for 70 Years. This sefer is comprised of 70 eclectic essays ranging from pure historical anecdotes and allegories to fundamental exposition of Jewish thought and philosophy, composed by a variety of well-known authors. The sefer and the Yom HaShoah program of “70 Days for 70 Years” expressed the need and obligation to “remember the past to build the future.”

The special program on Thursday included presentations by various students who spoke about their personal relationship to the Holocaust as well as speeches ranging from a recorded video of Rabbi Yisrael Meir Lau, former Chief Rabbi of Israel to a passionate speech by Rabbi Baruch Wieder, the Rosh Yeshiva of Yeshivat HaKotel in Israel.

One student speech in particular stood out to many of us. Yehuda Weschler, an MTA senior, spoke about how he was set to interview his grandfather about his Holocaust experience as part of the special MTA senior elective, Names Not Numbers. Unfortunately, his grandfather, Dr. Richard Weschler, a successful chemist who broke out of the chains of the Holocaust to be me’saken olam with his inherent chemistry skill, passed away just before Yehuda was able to interview him. Yehuda spoke about how Dr. Weschler was not a free man the first half of his life, but he never gave up. He rebuilt his family after the horrific Holocaust and made sure to raise his family with Jewish values. Today we live on in his legacy. 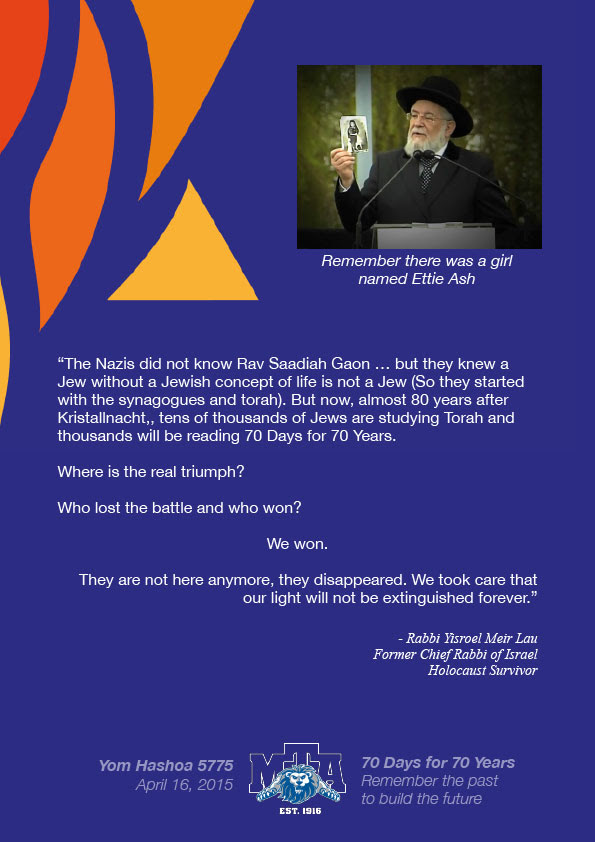 In his recorded speech, Rav Lau spoke about how a Jew without a Jewish concept of life is not a complete Jew; therefore the Nazis, yemach shemam, sought to destroy synagogues and Torah. Now, however, 80 years after Kristallnacht, tens of thousands are studying Torah all over the world . Rav Lau concluded, “They are not here anymore; they disappeared. We took care that our light will not be extinguished forever.” Rav Lau tried to communicate to us that the only way we can build a better future is by remembering the past and staying true to our Jewish concept of life and Jewish values.

To conclude the program, we heard from Rabbi Baruch Wieder. Rav Wieder spoke about how we need to always remember that we are Jews – no matter where we live. As Jews, we represent the Jewish people and must always remember to act as such. We must make sure to always live with a mindset that we are first and foremost Jews and must never make a chilul Hashem.

With that said, we all hope that we can learn from the past, from past experiences and past mistakes, so that we can build a better future – together – for am yisrael.