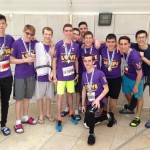 MTA Students Join Shalva in the Jerusalem Half Marathon

By mta On March 25, 2016 · Leave a Comment · In Extra-Curriculars, Special Programs, Trips

Last Wednesday, 14 students accompanied by Elie Hirt of our Student Activities Department flew to Eretz Yisrael with Team Shalva to run in the annual Jerusalem Marathon. Upon arriving in Israel on Thursday, the group went directly to the Shalva facility to see and interact with some of the […] 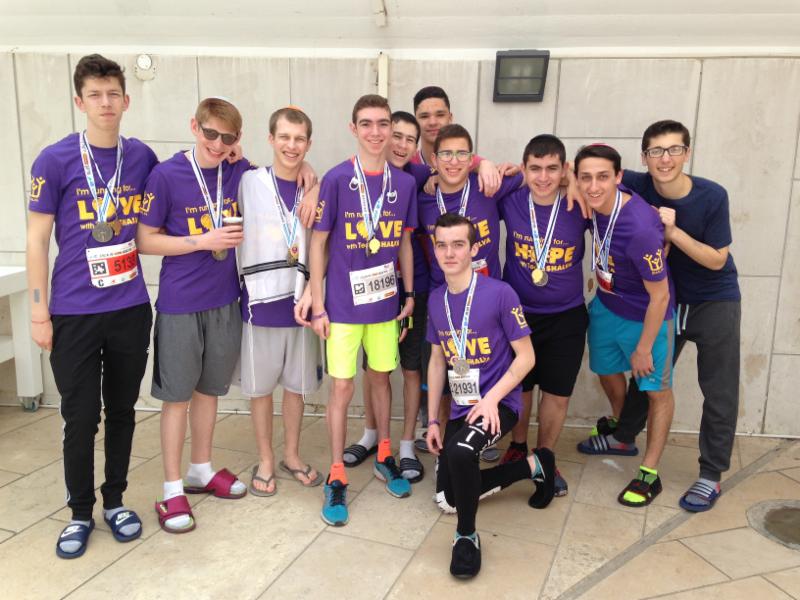 Last Wednesday, 14 students accompanied by Elie Hirt of our Student Activities Department flew to Eretz Yisrael with Team Shalva to run in the annual Jerusalem Marathon. Upon arriving in Israel on Thursday, the group went directly to the Shalva facility to see and interact with some of the many disabled children that Shalva helps. After dropping off their luggage at the beautiful Crown Plaza Hotel in Jerusalem, they then went on an amazing tour of the famous Yeshiva Aish HaTorah, which overlooks the Kotel. At the end of the tour, everybody went up to the roof, which has one of the most amazing views in all of Israel. Following this, the group went to daven a very meaningful mincha at the Kotel, after which they returned to the hotel and attended a lavish pasta party, preparing them for the big race in the morning.

At 5:00 AM on Friday, all the Shalva runners woke up for shacharis, and immediately afterwards, headed off to to begin the main purpose of the trip: the big race. This is what all their training was for! The students’ running times for the half marathon ranged from an hour and forty three minutes to two and a half hours. Some students running in the 10k also finished with outstanding times. Three hours after beginning the race, everyone gathered back at the hotel for the victory party! The hard part was now over and the boys were ready for some fun! Most of the students went to Machaneh Yehudah where they bought good snacks and drinks for Shabbos, while others stayed in the hotel to rest.

Friday night came and all the boys were ready for the inspirational Shabbos that they had ahead of them. Over Shabbos,the MTA boys met many other students from other yeshiva high schools and heard from famous speakers too. As Shabbos came to a close, everyone enjoyed a musical Havdalah led by Rav Motti Miller and were sad to see Shabbos go, but they knew that there was still more excitement to come. On Motzaei Shabbos, all the students from MTA and many other schools went to the Cinema City mall to have a nice dinner and just relax. They then boarded a bus and went to the walls outside of the Old City, walked to the plaza outside the Churva Shul for a quick “mifkad” led by Rav Yair Eisenstock, and then walked to the nearby Beis Midrash of Yeshivat Orayta for a siyum and a story. They went also went onto the roof of the yehiva for more slow singing and another beautiful view of the Kotel. The program concluded with everone walking down to the Kotel for 30 minutes of private Teffilos and a very inspirational kumsitz with Rav Yair. Everyone had tears in their eyes by the end and many students, from all the schools, said this was the highlight of their trip.

The final day of the awesome weekend sadly arrived but our own Elie Hirt made sure the trip would not end with just a simple hotel breakfast. We were off to the Dead Sea! The students enjoyed a Sheirut ride full of singing which continued ith a kumsitz in the middle of the Yam HaMelach for almost an hour! After returning to Jerusalem, the group davened mincha in the hotel and then went to Ben Yehudah for tasty shwarma and gift buying. With two hours still left until the bus was to leave for the airport, the students ran to daven maariv at the Kotel one last time, arriving back at the hotel just in time to catch the bus which took them to the airport. “Only 363 days until we’re back” said Hershele Vaisman (’17), looking forward to next year. Boarding the plane, everyone said their goodbyes to their homeland and were certainly happy they had come on this short but great trip.

Our thanks to Elie Hirt for everything he did top make this such a success!