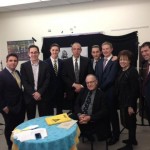 Prof. Alan Dershowitz (’55) Returns to YUHSB to be Interviewed for Centennial Course

As we near our school’s historic 100th year, seven MTA seniors – Eli Kahn, Yosef Kurlantzick, Shanan Miller, Avi Rothwachs, David Schmidt, Shimmy Socol, and Mendel Weintraub – are documenting the history of YUHSB as part of the elective course: “TA 100″–COVERING A CENTURY AT MTA: 100 YEARS OF […] 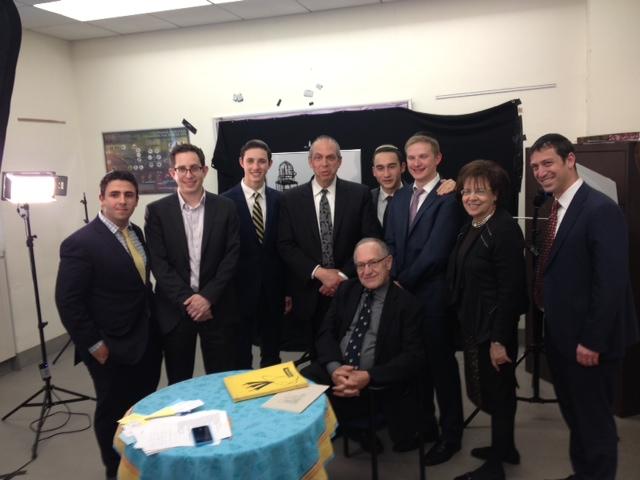 TA 100 is a unique course that combines sessions on American and New York Jewish history as background information, learning documentary film making tools to prepare for conducting interviews with MTA alumni, and compiling an oral history documentary film to be presented for the 100th anniversary of our yeshiva.

As part of our preparation, we had the privilege of meeting with Sarah Ben Tzvi, the editor of the Israeli magazine Segula, Israel’s equivalent to the National Geographic Jewish History Magazine.

After months of preparations we were honored to finally meet, interview, and film some of our esteemed alumni including Professor Leo Taubes (MTA ’51 and father of our very own Rosh Yeshiva, Rabbi Michael Taubes ’76), Bernard Rothwachs (BTA ’54 and grandfather of our own Avi Rothwachs ’16), and Professor Alan Dershowitz (BTA ’55). We asked questions about their life in our high school, about their education, about their pranks, about their activism in the Jewish world, about their message to us and lastly about their wishes for MSTA as it embarks on the next 100 years.

The mission has yet to be completed, though; we have 2 more interviews scheduled, and then comes the task of editing and producing the documentary. In addition, the project will continue through next year with more interviews and will culminatre with the compiling of a book of alumni reflections.