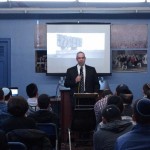 On Thursday, MTA honored the memory of the 6 million Jews who were killed during the Holocaust by holding an incredibly meaningful Yom HaShoah program, designed by students in conjunction with our Student Life Department. The presentation was organized by many of the 21 Seniors who visited Poland just a few weeks ago […] 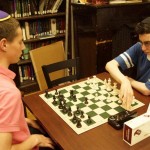 In an ultimate showdown between the top Yeshiva Chess League teams, hosted in our very own MTA library, Ramaz pulled away with thevictory, followed closely by MTA, which came in second place. In third and fourth place were Frisch and North Shore, respectively. MTA won four out of […]

This year’s third and final blood drive was another great success, with forty-two donations of a pint each, or a total of five and a quarter gallons of blood. These donations will provide blood to approximately three people per pint, or 126 people, who so desperately need this life-saving blood. It […]

The MTA Lions JV Softball team picked up a big win over the SAR Sting this past Monday. The Lions took a commanding lead in the very first inning by scoring four runs, the first two coming thanks to Coby Sorotzkin’s (’19) 2-run homer. Then, in the third inning, Chaim Weinstein […]