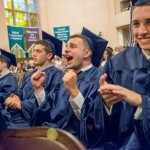 This past Tuesday night, the MTA class of 2016 spent their final hours in the school which they had learned to call home over the past four years. MTA’s 97th annual commencement took place that night in Lamport Auditorium starting promptly at 7 PM. After all the graduates marched […] 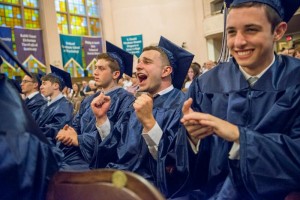 This past Tuesday night, the MTA class of 2016 spent their final hours in the school which they had learned to call home over the past four years. MTA’s 97th annual commencement took place that night in Lamport Auditorium starting promptly at 7 PM. After all the graduates marched down the south aisle of the auditorium and took their places, the crowd was greeted by Rosh Yeshiva and Head of School, Rabbi Michael Taubes (’76), who shared words of wisdom with regards to both the graduating class as well as the parsha, noting that a successful teacher, like Moshe Rabbeinu, knows that he has to go the “extra mile” for his students, and adding that one should take this approach in every area of life. Immediately following this, Jason Blatt (’16) delivered the Invocation, providing a heartfelt and personal account of his MTA experience and, after explaining that Chazal instituted Modim DeRabbanan during the repetition of the Shemoneh Esrei because thanks must always be personal, he then thanked all those, including the school itself, for making him into who he is today.

Following Jason, the President of Yeshiva University, Richard M. Joel (’68), spoke to the crowd regarding the extraordinary class seated there that night and urged them to recall that Hashem is always “taking a picture” and that one must therefore be careful to put one’s best foot forward. President Joel was followed by Ari Hagler (’16), who gave a humorous Salutatorian address, including an insightful explanation of why we count the days during Sefiras HaOmer, which served as one of the many highlights of the evening. The program progressed when Tsahi Halyo (’16), this year’s Valedictorian, addressed the crowd and after quoting the Gemara that one learns from his teachers, from his friends, and from his students, presented Mr. Adam Dobrick, Assistant Principal for General Studies, with his very own cap as he would be “graduating” along with the rest of the class that night, moving on next year to a new position. This act sparked both emotion and laughter amongst the guests and graduates alike, in recognition of Mr. Dobrick’s devotion to our school and its students.

Soon after, the crowd enjoyed a musical interlude by the MTA award winning chorus as well as the MTA award winning band. This helped pave the way for the rest of the evening which included a Siyum, a long-standing practice at MTA graduations. The Siyum was introduced by Associate Principal Rabbi Shimon Schenker, and then delivered by Shalom Stieglitz (’16), who read the last passage of Masseches Makkos and recited the Hadran.

After the announcement of various individual awards and honors by Mr. Dobrick and Grade Dean Rabbi Avraham Shulman, Michael Kolber (’16) provided the Benediction, beautifully and clearly analyzing what the recitation of a berachah really represents, before all the graduates symbolically threw their caps in the air. Finally, Dr. Seth Taylor, Principal for General Studies called up all the students for the presentation of their diplomas, and the graduates then left the MTA building for the very last time of their high school careers (except for the U.S. History Regents exam next week!). A festive collation for all the graduates and guests in Belfer Hall’s Weissberg Commons capped off this special evening.

On a personal note: it has been an honor to serve as Editor in Chief of such a fine publication as A Lion’s Life and I am proud to say that I have been involved with this publication from my first week of high school until my last. I am sure that next year’s editors will live up to the title and maintain the publication’s illustrious reputation. All in all, it has been an honor writing and editing for the newsletter as well as an honor to have attended such an amazing high school as MTA. I know that I am a #lion4life!