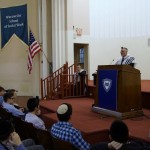 What is the purpose of my telling you about Rabbi Shmuel Borenstein ZT”L, a man most of you never knew? Perhaps we can explain it with the following moshol – you are a Yankees fan and I tell you all about the likes of […] 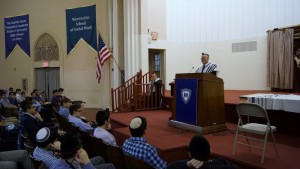 What is the purpose of my telling you about Rabbi Shmuel Borenstein ZT”L, a man most of you never knew? Perhaps we can explain it with the following moshol – you are a Yankees fan and I tell you all about the likes of great players that contributed to the history of this favorite team of yours. I tell you about Mantle, Dimagio, and Ford; or even Tresh, Pepitone and Stottelmyre. Their contributions are part of the fabric of Yankee Stadium. You talmidim walk these halls of MTA daily.. The place has a neshomo, and I am telling you about one of the people who breathed life into that neshomo from the time he entered as a talmid in 1956 until very recently.

I have little experience with hespedim as I am a Kohen, but I feel that is important for RSB (Rav Shmuel Borenstein) that we try to paint a small picture of this “Giant who stood on the shoulders of giants”, as one of yesterday’s maspidim so eloquently put it. (He had a father who was a Rosh yeshiva here at YU – R. Noach zt”l, who was one of the Brisker rav’s most beloved talmidim. One whose קשיות gave rise to many of the pieces of Torah that appear in print from the Brisker rav. Rav Soloveitchik ZT”Lis reported to have said that R. Noach could have just as easily as he been the Rosh yeshiva of our Yeshiva. You can see Rav Noach’s picture on the poster of pictures of Roshei yeshiva displayed on the wall of the 2nd floor.) In truth, my initial feeling when I heard of the petira on Motzai Rosh hashana was that RSB wouldn’t want to be matriach anyone, and certainly wouldn’t want to be mevatel Torah for anyone to attend his funeral. But upon discussion w/ R. Mendelson and R. Schiller yesterday morning on the way in to yeshiva, we concluded that we just couldn’t not go.

RB excelled in the middos of humility (Just as Hashem’s greatness is accompanied by humility, so was his), caring, and abundant patience. At his retirement farewell party, he spoke of אם בחוקותי תלכו constant growth and movement in Torah. R. Shapiro pointed out in his hesped that although he suffered serious and severe ייסורים (suffering) during the last couple of years of his life, and he knew that suffering is a great kapara, he never used that word. He just went about his business, and his love of Torah superseded whatever he might have been going through, be it the cancer he was fighting, the kidney failure, the pneumonia, and other ailments. The only one of his medical issues that he insisted on trying to fix and was something that he couldn’t live with, and was unwilling to compromise on was his failing eyesight. Without his eyes he wouldn’t be able to do that which he loved most – learn the Toras Hashem and just as if not more important to him – learn with his aineklach. When I asked RSB privately at his retirement party what he plans to do with his time, he didn’t bat an eyelash in responding that the one thing he looked forward to most was learning with the aineklach. The truth is, that his bitachon displayed itself not only in how he handled the suffering of his body, but when his house went up in flames a few years ago, scarring his lungs permanently, and he narrowly escaped with his family, he showed up the next day in MTA wearing the only suit he owned, attended the Rebbe’s meeting, and taught his shiur as if nothing had happened.

My relationship with RSB began when I was in MTA. RSB lived in the Bronx as did I and a number of other talmidim. We all ran to try to catch a ride home, and thus avoid public transportation. RSB couldn’t say no to anyone, so we all piled in, and it was like a clown car like a clown car!

When I became a Rebbe, we sat for years in the teacher’s room on third floor and ate breakfast and lunch together. Not only did he treat me as an equal, but actually asked ME for advice on chinuch. I was a rookie. What did I know? I should have been seeking HIS sagely advice.The same is true for all who knew him. Rav Shmuel made himself completely subservient to all.

RSB lways took the quote “lower” level shiurim. No one should think for a moment that RSB couldn’t give the highest shiur in the Yeshiva. He was a lamdan, and a thinker, and a mechadesh. But his עניוות didn’t allow him to reveal it. I know this to be true from the numerous Torah conversations we had over those years. As his nephew Rabbi Alan Schwartz pointed out, RSB could have been anything – he was brilliant. Not only did he teach a shiur, but also World History, American History, and Jewish History here in MTA.

As a Rebbe, RSB was totally dedicated to his talmidim. As I mentioned, he often had talmidim that were challenging in that they lacked motivation and often were not up to par in shmiras hamitzvos. RSB approached them with utmost patience, and worked individually and collectively with the boys to improve their dedication to Torah and Mitzvos. They felt his love, and responded accordingly. He didn’t win anyone over with fiery drashos or mussar speeches, but his talmidim respected him and what he stood for. He taught through the “הוא הי’ אומר” method. This is a phrase that appears in Pirkei Avos. It means “he used to say”. The commentaries explain that he may never have preached these words, but his actions and the way he lived proclaimed them loud and clear. It is not uncommon to meet a talmid of RSB from many years ago, (and I have met such talmidim) and for him to relate that the reason he is wearing tzitzis or saying asher yatzar today is becausec of the influence of RSB.

I was honored that RSB entrusted me with his son in my shiur. He always made me feel that he was so indebted to me for teaching his son when in reality I was the one who felt a real debt towards him.

For decades, RSB was a constant in MTA. He was always the ultimate optimist, almost to a fault. He refused to believe that any higher ups in YU ever had anything but pure motives in anything they did or any decisions they made about MTA. I was told that many years ago when YU was in serious financial crisis (when aren’t they?) the faculty was asked to donate 10% of their salary to the University. You guessed it – R. Shmuel, who one might have himself been considered in serious crisis, was in. He loved this place and believed in it.

Most importantly, RSB was a tzaddik in the truest sense of the word. His bitachon was apparent in the way he lived every moment of his life. He appeared as a simple man, but was indeed very complex. His temimus is not to be confused with naivete’. R. Hecht quoted the Gemara about the 36 hidden tzaddikim who sustain the world. He certainly could have been one of them. He also pointed out that in all the years of carpooling, through all their conversations, both those of Torah and of מילי דעלמא, he couldn’t recall one word of lashon hora ever spoken by this man. I will add that in all the years we sat together, I can attest that I also never heard one negative word about anyone or one drop of lashon hora.

It was refreshing to have RSB as a source of inspiration all the years I was here. I consider myself his talmid because I learned so much from him that I couldn’t have learned from any other Rebbe. He was a walking mussar sefer. It was a great honor to have been his colleague and friend, and to have been in his presence for all those years. R. Shmuel, I think I speak on behalf of the whole Yeshiva, both those who knew you personally, and those who just heard about the special person they missed out on, in saying that we will sorely miss you.

The Gemara states that in this world it’s an עולם הפוך – תחתונים למעלה ועליונים למטה. It’s a topsy- turvy upside-down world. People who should get kavod don’t, and those who shouldn’t do. Due to the middos that I described, RSB was a perfect example of this. But now, as the possuk says about a different Shmuel – Shmuel hanavi, ותשובתו הרמתה כי שם ביתו. The word רמה means heights. I feel we can confidently say about our Reb Shmuel, that he is now returning to the place that כי שם ביתו, that he can comfortably call home – the place of great tzadikim and gedolim, who will know how to put Reb Shmuel on the רמה – the pedestal he so rightly deserves.