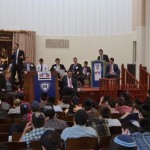 This past Monday, the MTA students gathered in Lamport Auditorium to hear an informative political debate arranged by Mrs. Levitt and Shua Brick (’11). The debate helped prepare the students for the Presidential election that would take place the next day. With Avi Strauss representing the Republican Party and […] 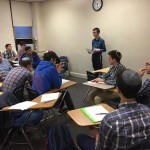 Last Thursday, the Honors College met for the second time this year; this time, Grades 9 through 12 convened separately with their respective grade leaders to discuss and deliberate a moving book regarding the harmful effects of the ink dying business on the health of people and the […]

The Varsity hockey team traveled to Westchester to take on the Westchester Hebrew High School Wolverines on Monday. Lead by goalie Zeve Kornwasser (’18) and a strong defensive effort, the Lions were able to beat the Wolverines by a score of 15-0. Scoring for MTA came easy with goals from: Elie […]

On Monday night, the Varsity Basketball team played their season opener at JEC. After a long drive out to Elizabeth, the Lions started off cold but still managed to hold JEC to just 5 points at the half due to their strong defensive play. The offense picked it up in the […]

MTA Lions Open Their JV Basketball Season with a ROAR!!

After a crushing loss in the final minutes against the JEC Thunder last year, the MTA Lions were eager for revenge as they opened the 2016-2017 season against the same team. However, the sweet taste of victory took a while longer than expected, as JEC, led by Yair Kimmel, opened up […] 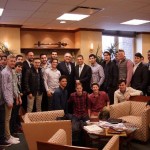 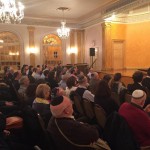 This past Monday night, a group of our students attended the first of this year’s Centennial Lecture Series talks to hear from award winning journalist and author, Yossi Klein Halevi (’71). The lecture took place at The Jewish Center on the upper west side, which will soon be celebrating […]

This past Shabbos, Rabbi Mendelson’s shiur partook of their first “In Shabbos” of the year. The purpose of the “In Shabbos” is first and foremost to spend Shabbos with the shiur engaged in talmud Torah on the Yeshiva University campus and in the Beis Medrash, the ideal atmosphere for an inspiring […]