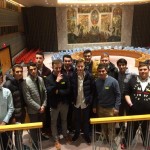 As lunch began on Tuesday, January 3, students from the Model UN team boarded a bus and headed down to the United Nations headquarters. With little traffic, the group of students arrived downtown earlier than expected, affording them time to stop in at the British and Venezuelan consulates to […] 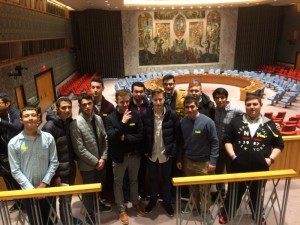 As lunch began on Tuesday, January 3, students from the Model UN team boarded a bus and headed down to the United Nations headquarters. With little traffic, the group of students arrived downtown earlier than expected, affording them time to stop in at the British and Venezuelan consulates to learn something about these countries, which the students will be representing this year at the Yeshiva University Model United Nations (YUNMUN). Though neither consulate granted them a meeting with their respective international politicians, the students did have the chance to relax in the inviting lobby, taking pictures and looking at the exquisite Venezuelan artwork.

As it got closer to the tour time, the students entered the UN complex. They passed through security and walked into the visitors’ lobby of the UN. As they walked down the main lobby, they saw the portraits of the UN’s different Secretary Generals, and were surprised to see the depiction of Kurt Waldheim, an ex-Nazi.

After finally starting their tour, the students’ tour guide introduced them to the many museum-like exhibits that were scattered around the hallway which would lead to the UN committee rooms. Though no committees were meeting at the time, the MTA students were able to enter and sit in the onlookers’ section of the Security Council, Trustee Council, and the General Assembly. The students learned about the culture of different nations as the tour guide described why certain international artists designed the committee rooms in the way they did.

Although the students learned about human rights and its importance to the UN, it was interesting to many of the the students how the UN’s history, together with its current policies, still affect Israel and its destiny today. They learned that the initiation of the Universal Declaration of Human Rights and its current 30 Articles were inspired because of the Holocaust and its many atrocities. The students were then able to walk into the historically famous General Assembly, where the UN voted in 1948 on the future of the State of Israel in the Middle East. Though the students realized how Israel and the Jewish people have been great focal points of the UN’s activities for over the past 60 or so years, they also realized how many of the world’s nations continue to be uncertain regarding their stance against Israel. As the boys stood in the Security Council, they imagined US Ambassador Samantha Power, sitting in the seat designated for the US, abstaining from the vote on Israeli settlement just a couple of days prior. They were also disappointed to find an exhibit on the contentious situation between Palestinians and Israelis explaining the situation in Israel from a very pro-Palestinian viewpoint.

Overall, though, it was a great learning experience and preparation for Model UN for the students, and they enjoyed the fascinating experiential learning opportunity.