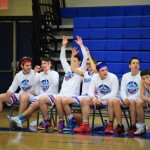 MTA’s first Winter Classic filled the school with a magnificent sense of school pride. On Monday night, MTA Varsity Hockey and Basketball both went head to head with their respective TABC opponents. MTA provided the students with beautiful long sleeved dri-fit shirts with the logo […] 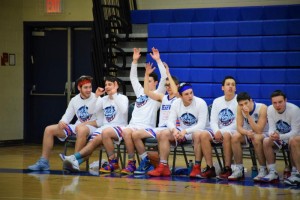 MTA’s first Winter Classic filled the school with a magnificent sense of school pride. On Monday night, MTA Varsity Hockey and Basketball both went head to head with their respective TABC opponents. MTA provided the students with beautiful long sleeved dri-fit shirts with the logo of the Winter Classic on it, specially designed by Josh Appel (’17). To lead off the night, the hockey team took the floor to a packed gym, a roaring crowd, and flashing lights.

After the Star Spangled Banner and Hatikvah were sung by the MTA chorus, the ball was dropped, and deafening chants supporting the Lions could immediately be heard around the Lions’ Den. Shortly into the first period, TABC was able to score, and the Lions finished the first period down 2-0. They played strongly throughout the second period, and the score remained 2-0. Between the first and second periods, MTA picked the winners for who would have the opportunity to score a goal behind an inanimate goalie. Avraham Levy (’20) had the opportunity to win $250 for a full court shot and Aryeh Margolin (’18) $100 for a half court one. Unfortunately for them, they both missed. In the third period, the Lions were unable to rebound. Yitzy Weiss (’17) was able to chip in a goal. The Lions hope to rebound against Frisch on February 6th.

The MTA students, hungry at this point from cheering on the Lions, were treated to a Carlos and Gabby’s dinner in the YU dining hall towards the end of the hockey game. As the MTA students were finishing up dinner, the highly touted Varsity Basketball game began. The Lions came out hot behind Aryeh Halpert’s (’17) two quick threes. After a tough second quarter, they went into the locker room down 3 at the half. During halftime, Hudy Weiss (’19) had the opportunity to hit a halfcourt shot for $250, but his shot hit the back rim as the crowd collectively released their breath. Tzvi Sabo (’17) also just barely missed a three point shot for $100. The Lions fought hard in the 3rd and regained the lead with help from Yehuda Buchbinder’s (’17) strong play. The Lions ended the third quarter down five points. Eli Burg (’18) missed his three-pointer for $100 dollars before the fourth quarter began. Although Aryeh Halpert hit a couple more threes down the stretch, the Lions’ last efforts ultimately came up short, as the TABC Storm connected on all their foul shots to edge out the favored Lions.

The MTA students, perhaps with hoarse voices, went home satisfied with their new gear and full stomachs, despite the tough losses. The MTA students appreciate the efforts of Josh Appel (’17), Daniel Rosenberg (’17), Zach Stein (’17), Elie Hirt, Rabbi Kessel, Shuey Jacoby, and the sports management squad in coordinating this wonderful event and look to have more opportunities to support their Lions!