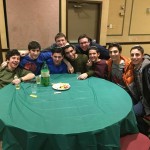 Juniors Make a Splash on their Grade Trip

This past Wednesday and Thursday, the Juniors traveled to the Pocono region of Pennsylvania for their annual grade trip. The trip kicked off with the students going to a sports complex, fully loaded with turf-fields, an arcade, and a laser tag course. The boys split up into groups and […] 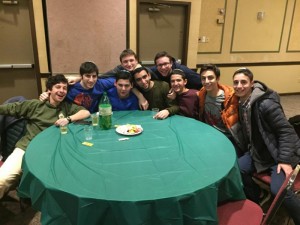 This past Wednesday and Thursday, the Juniors traveled to the Pocono region of Pennsylvania for their annual grade trip. The trip kicked off with the students going to a sports complex, fully loaded with turf-fields, an arcade, and a laser tag course. The boys split up into groups and spent time playing arcades, laser tag, soccer, basketball, or flag football. They were then treated to scrumptious Highland Park Pizza, following which they proceeded to a local Young Israel for Mincha and shiur learning, the clear highlight of the trip.

After the shiur, the group drove to Camelback Snowtubing, where they ignored the cold at the top of the mountain and slid right off. After snowtubing, the Juniors were off again, this time to a local hotel that had dinner set up for them. After a short optional shiur from Rabbi Mendelson, who spoke of the halachos of Krias Shema al HaMita, night had rapidly descended, but the Juniors had not yet seen it all.

After dinner, they were brought to the incredible Kalahari Resorts, home of America’s largest indoor water park, where they would be staying the night. After Maariv, the boys had the massive waterpark to themselves, surfing and sliding until midnight. For those who were interested, Rabbi Mendelson led a Kumzitz until approximately 2:00 AM, joined by the four Makor Chaim exchange students who added to the experience with their guitars and songs.

On Thursday, shacharis was at 9:00, followed by more Shiur learning. Following breakfast, the students loaded the bus and went to an ice rink in the area where they were introduced to the fascinating game of broomball, which is somewhat like ice hockey without skates or sticks, and with a ball instead of a puck. Instead of sticks, players use wooden rods with solid triangles on the end to hit the ball. Needless to say, the Juniors had an excellent time slipping and falling as well as playing broomball as a grade. In the six team competition, the team of Shloime Ash, Zvi Fermaglich, Yosef Layliev, Ephraim Meiri, captain Meir Uretsky, and Sam Weisman won. Following broomball was Mincha, after which all of the boys got back on the buses to return to MTA or their home community. The Juniors had a phenomenal time on the trip, constantly thanking Rabbi Green and Elie Hirt for their planning.