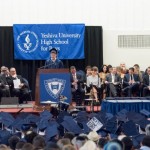 On Monday, MTA held its 99th annual commencement ceremonies, celebrating the graduation of this year’s senior class. The evening began with the processional led by Shuey Jacoby, the singing of the National Anthem by the YUHSB Choir, and the Presiding Remarks of Rabbi Kahn. After this, Ezra Wildes (’17) […] 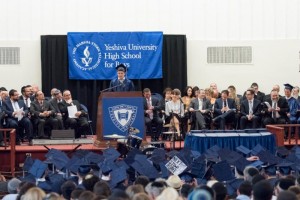 On Monday, MTA held its 99th annual commencement ceremonies, celebrating the graduation of this year’s senior class. The evening began with the processional led by Shuey Jacoby, the singing of the National Anthem by the YUHSB Choir, and the Presiding Remarks of Rabbi Kahn. After this, Ezra Wildes (’17) presented the invocation, which was followed by brief but powerful remarks given by YU’s new president, Rabbi Dr. Ari Berman (’87). Rabbi Berman spoke to the graduating class and discussed all the great world leaders that MTA has produced, emphasizing that every graduate has that same potential, and can even be the president of YU down the road! Additional remarks were given by salutatorian, Raziel Siegman (’17) and valedictorian, Yair Caplan (’17), who told the audience what made the MTA experience special for them, followed by a message to their fellow graduates. Then, Rabbi Taubes spoke about the importance of Torah, which was appropriately followed by a siyum on Masechet Rosh Hashanah by Yitzy Richter (’17). The final speaker for the evening before the students received their diplomas and tossed their hats was Yitzy Weiss (’17), who gave a bracha to the senior class in his benediction address. Interspersed in the ceremony was a musical interlude by the MTA choir, including a mesmerizing performance by the two senior band members, Shiah Maisel (’17), who demonstrated his excellent vocals and experienced stage presence, as well as Shmuel Turner (’17) who stunned the crowd with his drumming – using rulers instead of drum sticks!

After all was said and done, over 80 students officially graduated from MTA, now ready and equipped to make their mark on the world. The only thing left to do was celebrate (and take the US history regents)! The faculty, graduates, and family members walked down the block to Belfer Hall for a bittersweet completion of the evening. While joy over the graduates’ accomplishments during last four years could be felt in the air, it was also time to depart from the teachers, administration, and many friends, whom the students had spent the last four years with. Nevertheless, the graduates now enter the ranks of alumni and are “Lions4Life.” The doors of the school are forever open to them and the rebbeim, faculty and school leaderhship looks forward to staying in touch and watching their continued life journey in the years to come.

On behalf of the Class of 2017, I would like to express my sincere Haaras Hatov for all that MTA has done for us in our paths to becoming young adults. Additionally, I would personally like to thank “A Lion’s Life” for giving me the opportunity to be editor-in-chief for the past year. I have learned much for my writing and editorial capacity, and am indebted to all those who support this publication, by running, writing and reading this weekly newsletter.