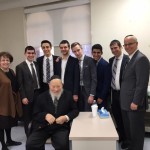 The Names, Not Numbers program, developed and created by MTA Director of Special Programs Mrs. Tova Fish-Rosenberg, transforms the teachings of the Holocaust by taking it beyond traditional classroom walls, and turning it into an interactive, creative, and empowering educational lesson.  Students participating in the program have the meaningful opportunity to learn about the Holocaust […]

The Names, Not Numbers program, developed and created by MTA Director of Special Programs Mrs. Tova Fish-Rosenberg, transforms the teachings of the Holocaust by taking it beyond traditional classroom walls, and turning it into an interactive, creative, and empowering educational lesson.  Students participating in the program have the meaningful opportunity to learn about the Holocaust from those who experienced it, preserve the survivors’ stories for future generations, and form intergenerational friendships with their interview subjects.

This week, students interviewed Holocaust survivor Mr. Berel Zisman, who was born in Kovno in 1929.  He came from a well-off family and his father owned the second largest wholesale grocery store in Lithuania.  In 1941, the Germans invaded Kovno and Mr. Zisman’s family was forced to move into the ghetto.  They had to trade their 16-room home for a hut owned by a neighboring Lithuanian.  They took the bare necessities with them, including one piece of luggage that contained wheat so they would be able to make matzah if they had to stay in the ghetto for Pesach.  One day, Mr. Zisman went with his father to Slabodka (a part of Kovno) to look for better housing possibilities.  They walked into abandoned homes where Jews once lived and saw blood stains on the beds and cribs. They learned that the Lithuanians had unleashed their hatred and slaughtered many of the Jews – men, women, children, and even babies in their cribs.  Mr. Zisman said that these were the most horrible scenes he saw throughout the Holocaust.

After some time, there were rations in the ghetto and his father was chosen to help manage the store and later, the bakery.  He recalled a time when his father was in the store and a Nazi soldier came in, drew his sword, and began cutting off his father’s beard.  He succeeded in cutting off half of the beard when the soldier was called away.  Mr. Zisman’s father wore a scarf around his face until his beard grew back.  Soon after, the Nazis began making their selections.  Families that were sent to the left of the line were placed in a small ghetto overnight and shot the next morning.  9,000 Jews were shot that day.  Mr. Zisman’s family was selected to go to the right of the line.  Rather than await their fate, many Jews decided to hide.  They built bunkers and partnered together to dig a tunnel with supplies.

In 1944, on Gimmel Nissan, Mr. Zisman’s family was hiding in their bunker when they were discovered by the Nazis.  It turned out that a fellow Jew saved himself by revealing where other Jews had hidden.  Mr. Zisman’s father and brother were taken away that day.  Mr. Zisman and his other brother were sent to Dachau.  Two weeks later, his brother was sent to Auschwitz, where he remained until 1945.  In April, Mr. Zisman was sent on the Death March and was eventually liberated.  He reunited with his brother in 1945 on Erev Yom Kippur.  Mr. Zisman’s interview will be shown later in the year when MTA’s student-edited interviews are screened at the Names, Not Numbers culminating event.