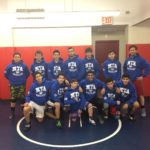 This past President’s Day weekend, 15 yeshiva wrestling teams descended upon the Zayat Athletic Center, long time home to the Frisch Cougars and new home to the Henry Wittenberg Wrestling Invitational. For the MTA Lions, the two-day tournament began on Friday morning, with a Shabbaton component that started early Friday […]

This past President’s Day weekend, 15 yeshiva wrestling teams descended upon the Zayat Athletic Center, long time home to the Frisch Cougars and new home to the Henry Wittenberg Wrestling Invitational. For the MTA Lions, the two-day tournament began on Friday morning, with a Shabbaton component that started early Friday afternoon through early Sunday morning, then had the action pick up again after Shacharis on Sunday Morning. For every Shomer Shabbos wrestler, Wittenberg is the final test of a trying season. There are no city qualifying rounds or state-wide tournaments for someone who proudly represents Torah U’Mitzvos on the mat – this is the one national tournament built into the average yeshiva high school wrestler’s schedule.

Twelve MTA Lions were led by Senior Captain, Noah Dure (’18). With gaps at 4 weight classes, the Lions were being overlooked as title contenders – heavy favorites to win it all were SAR (the defending champions), Kushner (last year’s narrow runners-up), and Frisch (the most dominant team during the regular season). Before any of the teams took to the mats for warm ups or stretching, a tournament-wide Rosh Chodesh davening was led by our very own Nathan Samuel (‘21) for Shacharis and Zach Gurwitz (‘18) for Mussaf. In a show of achdus, a Frisch student secured a Sefer Torah, a TABC student leined, and aliyahs went to wrestlers from four different schools. Eli Amsellem, a Freshman at YU and one of MTA’s Assistant Coaches, mentioned to the boys that they “don’t know how lucky they are to compete at a tournament where they can wear tefillin in the gym before weigh-ins”.

The first day of competition started out strongly enough; out of 9 matches wrestled, MTA picked up 5 wins, all won by pin. Afterward, the Lions packed themselves on to a bus headed for Teaneck, where they had a Shabbaton at the home of Abie Veroba (’18), filled with zemiros, divrei Torah, story telling, academic debates, and much needed rest. A Motzei Shabbos team building session was called off due to the inclement weather, but that didn’t stop hot pizza from making it from Pizzalicious to the Veroba house.

The wrestling continued on Sunday morning, with consolation brackets testing the mental fortitude of the wrestlers fighting back for a 3rd place finish. As the day pressed on, the MTA rookies were beginning to shine. Many opposing coaches were taking note of the scrappy MTA style – most of our matches were won by pin, and the ones that we lost, were lost while forcing opponents to work until the final second. At the pass of the midday break, the Lion’s middle- and upper-weight classes were given their chance to wrestle.

After everything shook itself out, MTA had pushed two wrestlers to the finals: Avi Dier (160) and Noah Dure (195). Senior Zach Gurwitz (152) and Sophomore Josh Hornstein (126) would be hunting for a third place finish and teammates Benjy Bral (’18) and Shmuel Dorwitt (’20) would fight it out for the 5th place finish at 132. In an exciting display of no-quarter, give-it-all-you-got wrestling, Dorwitt finished 3-1 over Bral. Gurwitz took a tough loss to an Ida Crown Senior. Hornstein wrestled a DRS opponent that he had beaten in the preliminary round, but ended up getting beaten in their second meeting.

Before the finalists were called to the head table for a final meeting, all activity in the gym was paused for Mincha. After Mincha, MTA had a huddle where they were reminded of their guiding principles: have fun and have each other’s backs. Everyone was rallying around Avi and Noah to give MTA a big finish to a tough tournament – and, man oh man, did they deliver.

Avi was set to wrestle Moshe Goldsmith, a hard-nosed Frisch wrestler and Noah was paired up against Aharon Braun, Kushner’s Team Captain and last year’s champion at 182. When asked if he was nervous to wrestle last year’s champion, Noah said that “[Braun] was champion last year — but this year is this year”. Dier managed to comfortably hold a 5-1 lead. Dure finished his match with a commanding 10-2 finish. While Kushner, the eventual tournament champions, and Frisch, the third place team, respectively had 7 and 5 finalists, they each had only 2 champions, the same number that MTA had produced.

After the closing ceremonies, the teams all davened Maariv together. One final group huddle, as well as a few containers of ice cream, was the final send off for the 2017-2018 MTA Lions. A core group of Freshmen and Sophomores now have their eyes set on building a championship-caliber team for Wittenberg 2019.