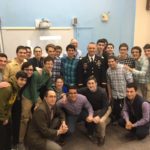 MTA Honors College students welcomed United States Army Lieutenant Colonel and Chief of the American History Division at the United States Military Academy (West Point) Seanegan Scully on Tuesday, March 20th. Lieutenant Colonel Scully discussed the Pulitzer Prize winning book, “Washington’s Crossing”, by David Hackett Fisher, which Honors College students are currently reading.  He explained how the study of history is a debate, which allows one to analyze the people and actions of the past, and how debating the details of what happened in any given historical event, is instrumental in developing a greater knowledge and understanding.  Lieutenant Colonel Sculley also led an interactive discussion with students on General Washington’s motivations for the actions he took in the Battle of New York, and explored why Washington would have tried to defend Manhattan against the superior British forces in the first place.  Students were grateful for the opportunity to hear from Lieutenant Colonel Sculley, a true expert in both history and the military.