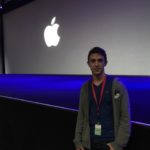 For the second consecutive year, MTA Senior Aryeh Greenberg has won a scholarship to attend the Apple Worldwide Developers Conference, taking place on June 4 – 8 in San Jose, CA.  WWDC offers 100 technical and design-focused sessions presented by Apple engineers, hands-on labs, one-on-one consultations with experts, guest speakers, and networking events. The WWDC scholarship program provides talented students with an opportunity to attend the conference free of charge, including lodging, and offers a one-year membership to the Apple Developer Program at no cost.

Aryeh won the scholarship by programming an innovative game, Swift Playground, where the user test drives the new Apple Car, a highly speculated product which Aryeh made his own version of, through four levels.  “It has Apple CEO Tim Cook attached to the top and you get some instructions from him throughout the game,” Aryeh explained. “In the last level the car flies to Pluto and passes Tesla CEO Elon Musk’s Tesla Roadster near Mars.”  Aryeh looks forward to attending WWDC again this year and is excited for the opportunity to further develop his programming skills.