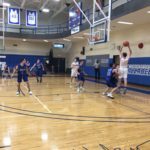 The MTA JV Basketball Lions took on MAOR at the Max on Sunday. Led by the starting 5 – Yosef Zakon (‘21), Azi Goldberg (‘21), Shua Alexander (‘22), Dani Wolk (‘22), and Tani Engel (‘21) – the MTA Lions kept destroying the MAOR Mavericks on both offense and defense. In the first half, Center Tani Engel kept picking up fouls, while putting up point after point after continuous assists by Yosef Zakon and Azi Goldberg.  As the game went on, Yosef Zakon drained threes and Dani Wolk and Azi Goldberg nailed down mid-range jumpers again and again. This was all possible with incredible defense from Akiva Coan (‘21) and Shua Alexander. The second half horn sounded and the Lions kept doing what they’ve been doing all game, but this time with the bench. As Eli Sheer (‘22) led the offense, Aron Skoczylas (‘22) and Dani Pfeiffer (‘21) put in shots as well layups. With great defense from Gershon Colton (‘22) on MAOR’s best player throughout the second half, the MTA Lions JV were victorious. With a final score of 64-42, MTA kept their winning streak alive and are now undefeated 3-0.