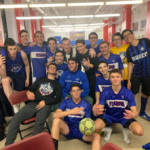 On Monday, May 6th, the MTA Soccer Lions squared off against MDY in a game that will be remembered as a refreshing and hard-fought win.  With a win, MTA would secure the 2nd seed and home field advantage throughout the first two playoff rounds. Magen David was eliminated from the playoffs […]

On Monday, May 6th, the MTA Soccer Lions squared off against MDY in a game that will be remembered as a refreshing and hard-fought win.  With a win, MTA would secure the 2nd seed and home field advantage throughout the first two playoff rounds. Magen David was eliminated from the playoffs before the game even started, but they still played to win.  The game started off as any other, but was scoreless seven minutes in, when starting goalie Eitan Pfeiffer (‘19) made a routine save, which landed him an injured finger. With just one game under his belt, Junior Akiva Sheckter was thrust into the spotlight in his first home game.   MTA was still without a goal, until Freshman Eli Sheer came in with a beautiful breakaway pass to Junior Kovi Pahmer to break the ice.

A constant theme throughout the game was aggression, MDY came to play strong and a little reckless.  The big playing style of MDY made it difficult for the famed “Passaic Punisher” line of Weiss (‘19) and Pahmer to get going, considering Weiss and Pahmer don’t rely on their size to make plays.  This was the perfect opportunity for big man Mendel Hein (‘20) to go wild. Hein was constantly targeted by two men at once, who tried to body and wrestle the ball away from him, but there’s a reason they call him “The Great Wall of Teaneck.”  Hein showed excellent poise and didn’t shy away from the moment, as he created plays using his body and his game IQ. Junior Elie Benedek played an incredibly smart game, taking advantage of the physicality of the Warriors by drawing several fouls, one of which, led to a beautiful free kick from Captain Hudy Weiss to lay up a header for Hein.

As the players on the court got used to the rough playstyle of MDY, the Warriors realized that there was a player yet to be hit.  Sheckter, who had a shutout until the late second, began to deal with an angry Warriors squad.  Sheckter dealt with cheap shot kicks and shoves, none of which were called until he grabbed the ball and was tackled by an oncoming striker.  Sheckter hit the ground face-first with his hands on his face. Sheckter literally spat the blood in his mouth out on the bench and ran back out to finish what he started.  Sheckter was met with roaring cheers as he got up and played on. His night wasn’t over, as MDY found their way past him for four goals in the second quarter. Those goals were complemented by a breakout showing for MTA Junior Rachamim Seltzer.  What a night to remember for Seltzer, as he was seemingly everywhere at once. Seltzer scored four goals by always being the first one to the ball and he didn’t slow down all night.

Up 7-4 at the half, MTA showed no signs of letting up.  The third quarter was an oddity to say the least, as clock errors unbeknownst to the refs caused it to be a near 25 minute quarter.  Throughout time span, Sheckter let in only one goal. Thankfully, this saga of a near scoreless and neverending third resulted in MTA being up 9-5.  Senior Ariel Retter then stepped in and finished the game strong. Sophomore Sam Blech and Benedek invigorated the offense towards a late goal from Benedek that caused MTA to rejoice.  The Lions had never been happier than when that bell rang to signify that they would have home field advantage for the first two rounds and the second seed playoffs. With an 11-6 win over MDY, this game proved that the MTA squad can win through willpower and survive any opponent.