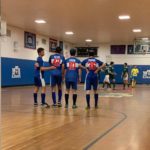 The MTA Soccer Lions missed out on the Championships last year, after a 16-4 loss to DRS in the semis.  This year, MTA had the chance for redemption as they faced off against DRS on Saturday night, May 18th for a rematch.  The game started off with the Passaic Punishers, […]

The MTA Soccer Lions missed out on the Championships last year, after a 16-4 loss to DRS in the semis.  This year, MTA had the chance for redemption as they faced off against DRS on Saturday night, May 18th for a rematch.  The game started off with the Passaic Punishers, Hudy Weiss (‘19) and Kovi Pahmer (‘20), making their case for best offensive line in the league.  The two were on the same page the whole night, as they made plays on defense and turned it ih a 4-0 lead going into the second. The big and lil’ combo of Freshman Eli “Flake Up” Sheer and Junior Mendel “The Great Wall of Teaneck” Hein continued to defy odds with massive offensive production.  The combination of Hein’s size and snto odd man rushes, making a big difference and giving MTA easy goals.  The duo got the best of DRS early, starting wittrength allowed him to get to the ball and create passes to the speedy Sheer for shots on net. Sheer had his best play of the season in a deep corner snipe off a Hein assist that had The Lions’ Den absolutely rocking.  The two added three goals in the second, two from Sheer and one from Hein. A true story of resilience lied in goalie Eitan Pfeiffer (‘19), who broke his finger in the regular season finale. Playing with a broken finger, Pfeiffer had an incredible first half, letting up just one goal.  Junior Tzvi Eisen rounded out the Lions’ defense, as he met seemingly every shot, broke up passes, and stopped several odd man rushes with his tactful defensive play. His start helped fuel a huge MTA lead. Up 7-1 at the half, MTA was riding the biggest high of their season, dominating on both sides of the court.

MTA came off the bench sluggish, the starters tired after such a commanding start to the game. However, the constant fire that is Junior Rachamim Seltzer raged on, as he was the first player to get to the ball on nearly every play.  As DRS and even MTA players huffed and puffed in exhaustion, they looked on at Rachamim Seltzer’s playstyle thinking, “man, that kid can run!” He continued to capitalize on his hustle plays by creating chances and scoring a beautiful second half goal.  DRS made their statement too, as they attempted to climb back, bringing the score to 8-6. But the Lions finished the game 9-6, after another goal from Hudy Weiss, and secured their spot in the Championships. There is no ending more fitting than MTA playing Frisch in the final, considering the Frisch Coach is Captain Hudy Weiss’ father.  MTA will play Frisch at TABC this Sunday night at 7:45 pm.