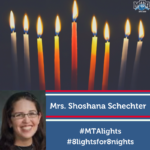 Tonight’s MTA Chanukah light is MTA parent Mrs. Shoshana Schechter. Mrs. Schechter is the Director of the Mechina Program and Assistant Professor of Bible at Stern College for Women. She holds masters degrees from the Bernard Revel Graduate School of Jewish Studies and Columbia University School of Journalism. She is a frequent lecturer on topics […]

Tonight’s MTA Chanukah light is MTA parent Mrs. Shoshana Schechter. Mrs. Schechter is the Director of the Mechina Program and Assistant Professor of Bible at Stern College for Women. She holds masters degrees from the Bernard Revel Graduate School of Jewish Studies and Columbia University School of Journalism. She is a frequent lecturer on topics in Tanach and has been involved in Jewish outreach programs on four continents. “What initially inspired me to devote myself to Jewish education was a trip I took as a high school Junior to the former Soviet Union during the communist regime. Learning Torah and practicing religion were forbidden then. I was sent with several fellow students on a mission to teach Torah secretly to Jews in Moscow and Leningrad who were trying to retain their Judaism, despite the threat of imprisonment. Meeting people who were completely moser nefesh for Torah made a lasting impression and made me appreciate Torah more than I ever had. I decided I needed to do something meaningful with my life to contribute to the Jewish community and help spread Torah. When I started teaching Tanach at Stern, I saw that there was a void in the beginner classes. I started the Mechina Program a few years later with 8 students. Now, 15 years later, we are thriving with well over 100 students from literally all over the world. We need to teach our students and our children to love Torah and that learning Torah is the way we can connect to Hashem. MTA does just that and gave my sons the chance to be in the best Beis Medrash environment any high school can offer, surrounded by MTA rebbeim, YU Roshei Yeshiva, and YU Semicha students. There are so many opportunities for good learning, as well as strong secular education. My oldest son, Yoni (‘15), became interested in computers after taking Ms. HLZacks’ Scientific Engineering class and now has a job lined up at Amazon after he graduates college. My boys felt a part of the MTA community through programs like the Yeshiva Fellowship, playing on sports teams, and through their close relationships with many of their teachers and rebbeim. It is so important to give back and be involved in the community, because caring for our community is what makes us strong. Rav Yaakov Kaminetsky explains in the אמת ליעקב that Noach starts off as an איש צדיק and becomes an איש אדמה (a lower level) because he wasn’t עוסק בצרכי צבור- involved in the community. Unlike Moshe, who started out as an איש מצרי and became an איש אלקים because he was so invested in the community. The bracha of the Jewish people is to be a source of blessing to the world. The world includes the Jewish community, which is where our caring needs to start.” Thank you, Mrs. Schechter, for being a source of blessing and light for our community.