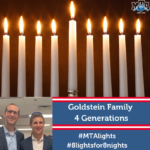 Today’s MTA Chanukah Light is the Goldstein Family, which includes four MTA generations. The tradition began with Rabbi Samson Goldstein, who attended MTA in the late 1920s/early 1930s. Rabbi Goldstein served as a Rabbi in Herkimer, NY and at the outbreak of WWII, he travelled to Europe to serve as a chaplain in the US […]

Today’s MTA Chanukah Light is the Goldstein Family, which includes four MTA generations. The tradition began with Rabbi Samson Goldstein, who attended MTA in the late 1920s/early 1930s. Rabbi Goldstein served as a Rabbi in Herkimer, NY and at the outbreak of WWII, he travelled to Europe to serve as a chaplain in the US Army and was on the forefront of liberating numerous concentration camps. At the conclusion of the war, he returned to the US, where he served as the Rabbi of the Fort Green Jewish Center. Rabbi Goldstein had a thriving law practice for many years and was very involved in local yeshivos and shuls, as well as communal and national Jewish organizations. The family tradition continued with his son, Joseph Goldstein (BTA ‘69). “Every day, my reaction to what is going on in the world makes me realize that I am a better person because of MTA. It affected many of my religious decisions and thoughts. It also instilled in me a strong love for Eretz Yisrael and love of Torah, which I have been fortunate to pass down to my children. My rebbeim had the biggest impact on me. All of my beliefs, including how I practice Judaism today, were molded by them.” Mr. Goldstein wanted the same experience for his son, Simcha (‘97), who carried on the family heritage. “MTA had a major impact on my life and helped put me on a religious path, which I still follow today. It is significant for me to be part of the MTA family, as it is truly a Shalshelet Ha Mesorah for me. Some of my father’s rebbeim were teaching in MTA when I attended and some of my rebbeim are still in MTA, where my son Yoel is currently studying. I also met some of my closest friends there. All of my MTA rebbeim made an impact on my life, including inspiring my love for learning. I was also influenced by the love and respect for Eretz Yisrael that was taught in MTA, as well as the importance of getting a top-notch secular education. I love that MTA has remained consistent in its message of making sure the talmidim are given a very serious secular education, while the main focus still remains religious growth. Many of the current MTA Rebbeim were friends of mine when I was in MTA and YU and I could not be prouder that they are now tasked with educating the next generation, including my son Yoel.” Continuing the Goldstein family legacy is Yoel (‘23), who began his MTA experience as a Freshman this year. “I am proud to be the fourth generation of my family to attend MTA. I am already inspired by the learning I am doing with my rebbeim and I look forward to the next four years, where I hope to make strong connections with my rebbeim and lifelong friends.” Thank you, Goldstein Family, for lighting the way for future generations and for including MTA in your family heritage.