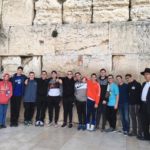 MTA’s Makor Chaim Israel Exchange Program Is Off To A Great Start!

MTA’s 12th annual Makor Chaim Exchange Program is off to a great start, as 13 MTA Sophomores arrived in Israel at Yeshivat Makor Chaim on Tuesday, December 31st.  Located in Kibbutz Kfar Etzion, Yeshivat Makor Chaim was founded by noted Jewish educators Rabbi Adin Steinzaltz and Rabbi Dov Singer. Each year, MTA Sophomores and YMC Juniors spend an academic quarter in each other’s yeshiva.  This immersive experience of Toras Eretz Yisrael affords MTA talmidim an opportunity to fully integrate into Israeli culture and absorb the spirituality of YMC. The MTA talmidim received a warm welcome as soon as they arrived at Ben-Gurion airport, where their madrich and Makor Chaim talmidim greeted them with singing and dancing.  Afterwards, they headed to Yeshivat Hakotel, where they experienced the grandeur of Yerushalayim from the famous rooftop. They experienced the Tunnel Tours as well as a virtual tour of the Beis Hamikdash using 360 technology. After a meaningful maariv at the Kotel, they made their way to YMC, where a big group of talmidim were singing and dancing for them.  The MTA talmidim were excited to start Shiur at YMC the next day, after touring Kfar Etzion, where the yeshiva is located, and they look forward to the rest of their trip.