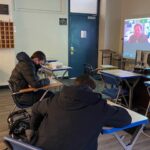 MTA’s Names, Not Numbers program welcomed award-winning investigative reporter Jonah Kaplan on Wednesday, December 16th. A two-time Emmy nominee, Kaplan joined ABC11 Eyewitness News in 2016 as the Political and Investigative Reporter. Seniors participating in the Names, Not Numbers elective course were privileged to learn important interview techniques during this informative workshop, which Kaplan led on Zoom. “Names, Not Numbers is a project in which we learn how to interview Holocaust survivors for a documentary we will be making ourselves,” said Senior Nussy Samuel. “I feel so privileged to be given the opportunity to learn about interview and communication skills from someone who has interviewed the President of the United States. I learned a lot from Mr. Kaplan’s presentation, including how to properly set up an interview with questions that flow, how to focus on a person’s perspective of their story, and how to make people feel welcome during an interview. These are all very important skills, both for conducting interviews and for communication in general, and I am very grateful that we have been given this privilege to learn from an expert.”

Kaplan demonstrated the application of the techniques he discussed using footage from some of his notable interviews and gave talmidim the opportunity to describe what they learned from the footage. He talked about how to earn the trust of someone who is sharing the most painful experience of their life and further explored how talmidim can make these stories matter to those who have not experienced them first-hand. “It was powerful to hear Mr. Kaplan talk about the importance of documenting the Holocaust and the unique opportunity we have to do so, due to the decreasing number of survivors who are still alive to tell their stories,” said Senior Akiva Kra. “It is our responsibility to make sure that their stories are not forgotten and can be passed down to the next generations.” This project carries even more significance in light of recent anti-semitic acts. “We are 75 years after the end of the Holocaust, the darkest chapter in human history – a chapter that so many around the world prayed and vowed ‘Never Again’. Today, we are witnessing more than ever the dangers of prejuice, discrimination, anti-semitism, racism, and intolerance,” said Names, Not Numbers Founder and MTA Director of Hebrew Language and Special Programs Tova Fish Rosenberg. “For the past 15 years, hundreds of MTA students have participated in the Names, Not Numbers oral history film documentary project, which has transformed the traditional study of the Holocaust into an experential project involving the eyewitnesses, i.e. the survivors and WWII veterans,” she continued. “Our students become the ‘witnesses to the witnesses’ and despite the challenges of the pandemic, they have taken on the responsibility to learn first-hand about the Holocaust and to pass on their knowledge through their documentary. They are the ‘upstanders’ who will actively work to prevent prejudice, hatred, intolerance, and injustice.