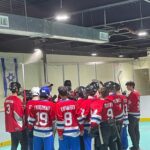 What an opening week for the MTA Varsity Lions hockey team! Coming into the season with a winning mentality, the Lions had every reason to bring maximum effort. Coach Rabbi Yoni Stone had high expectations for this team and they met those expectations picking up wins in each of their […]

What an opening week for the MTA Varsity Lions hockey team! Coming into the season with a winning mentality, the Lions had every reason to bring maximum effort. Coach Rabbi Yoni Stone had high expectations for this team and they met those expectations picking up wins in each of their first 2 games. On Opening Night, the Lions traveled to the East Side of Manhattan to take on the Ramaz Rams. The Lions controlled most of the first period, holding Ramaz to little time in the offensive zone and putting much pressure on the Rams goalie to make a save. Early on in the game, key shots on goal by Ori Engel (‘22) and Eli Sheer (‘22) sparked the offense, but unfortunately none of those shots ended, giving the Lions a 1-0 lead. With 2 minutes left in the first period, Zevi Burg (‘23) drew a cross checking penalty, awarding the Lions a power play for a minute and a half. It turns out all they needed was about 45 seconds. Captain Ezra Landa (‘22) received a bullet pass across the point from Noam Kornwasser (‘23) and fired it through the net putting the Lions up 1-0. A stellar 25 save performance from star tendy Shmuel Rosenthal (‘22) kept the game in check, and the Lions took their first victory of the season over the Ramaz Rams.

Just about 24 hours later, The Lions traveled down to Livingston, NJ to play against the Kushner Cobras. Pregame at the famed hockey rink with the No Diving sign, Coach Stone had one word for his team: Dominate. It was no surprise that the Lions started off very strong once again, keeping the Kushner defense very busy. On the second offensive shift of the game, Eli Sheer (‘22) made a nice pass through the defense, which set up Captain Ori Engel (‘22) for the one timer and goal. The Lions led 1-0 for the next 4 minutes until Kushner took a shot on goal from the slot which went in, making the score 1-1. In the second period, the Lions came out of the locker room ready, but so did Kushner. Both teams went back and forth getting shots on net and offensive zone time, until Zevi Burg (‘23), for the second time this season, drew another cross checking penalty, forcing Kushner into the penalty kill. Midway through the power play the Lions tried setting up a play in their defensive zone, but the puck was stolen and put in for a short handed goal, giving Kushner the lead at 2-1. Not even a minute later, Dani Greenberg (‘23) had a nice open look in front of the net and knocked in the puck off the crossbar to tie the game at 2. At the end of the second period, MTA had a huge opportunity to take a one goal lead on a shot by Eitan Warum (‘22), But Kushner’s goalie made an incredible save to take away that chance and go into halftime with a tied game. The third period was pretty dry aside from some great saves by goalie Shmuel Rosenthal (‘22), and some good shots on goal by the offense. Neither team got a goal through the net in the third period, which resulted in a sudden death overtime. Before overtime, Coach Stone reiterated what he said earlier: Dominate. Now was their time to shine. Despite Kushner’s strong urge to back themselves up and win, MTA came out stronger. Ori Engel (‘22) had what looked to be a goal in the first minute of the period, but that shot was blocked by a Kushner defender. With 3 minutes left in overtime, MTA was ready to end the game. Straight off the offensive change, Dani Greenberg (‘23) took a shot on goal that was very close to being his second goal of the night, but it hit the goalie’s pad and ended up right in front of the net. Kushner’s goalie was too slow to cover the puck and Max Sandel (‘23) took advantage. One putback shot was all it took to send the Lions to their second victory of the year. In a postgame interview, Captain Ezra Landa (‘22) said “Get used to this.” The Lions are keeping to their goals and will definitely be a force to be reckoned with throughout the season. The Lions are looking forward to inviting MTA fans back to the Lions Den for their next game on 11/18 against TABC.